Much of the Bible is filled with men and women of great faith, whose great trust and belief in God carried them through trials. Perhaps that’s why no story speaks to me in the Bible more than that of Thomas, or, as he’s more famously known, Doubting Thomas. I appreciate that Thomas existed, and that he doubted, because the existence of this story speaks comfort to me personally, since the majority of Biblical characters are people of great faith who see no need to have physical proof or direct interaction with God.

24Now Thomas (called Didymus), one of the Twelve, was not with the disciples when Jesus came. 25So the other disciples told him, "We have seen the Lord!" But he said to them, "Unless I see the nail marks in his hands and put my finger where the nails were, and put my hand into his side, I will not believe it." 26A week later his disciples were in the house again, and Thomas was with them. Though the doors were locked, Jesus came and stood among them and said, "Peace be with you!" 27Then he said to Thomas, "Put your finger here; see my hands. Reach out your hand and put it into my side. Stop doubting and believe."

In all of life I cannot help being both a cynic and a skeptic. This goes well beyond the religious/spiritual/faith worlds. I’m just a skeptic in general. I don’t believe outrageous stories, I don’t believe in aliens, I don’t believe 99.9999% of conspiracy theories in politics…heck, I somehow find a way to skeptical of evolution, creationism, and intelligent design all at the same time. I often watch peers and fellow churchgoers seemingly believe so easily. It’s like there’s not a doubt in their mind. Is it wrong of me to desire whatever trait breeds blind followership?

But here is Thomas. He’s one of Jesus’ disciples. And he doubts. When I read this passage and the book in general there’s not a sense that Thomas is any less of a disciple than the other disciples. There’s a certain comfort I take in that. I can only hope that—and I’m pretty sure it’s true—that a little self-doubt doesn’t make me any less of a Christian than those who have none. Despite the doubts that creep into my mind, I know what I believe. I believe it when I see Mt. Rainier, the Grand Canyon, Yosemite, and any other magnificent place that defies the randomness that others claim lies at the roots of creation. I know I believe because my prayers of both thankfulness and need are directed sincerely towards someone. I believe because I know that the reason I can remain joyful and happy all the time (most of the time!) is because of the Lord. I could go on and on.

Sometimes the doubts creep in. I’m sure they do for all of us. When they do, think of the Grand Canyon. And remember Thomas. Thomas was a disciple, met Jesus, and still doubted. I’ll remind myself of that as well.

These are the reasons that this is song is one of my favorites. Hope you’ll give it a listen. It’s called “Doubting Thomas” by Nickel Creek.

“Can I be used to help others find truth,
When I'm scared I'll find proof that its a lie,
Can I be lead down a trail dropping bread crumbs,
That prove I'm not ready to die,
Please give me time to decipher the signs,
Please forgive me for time that I've wasted,
I'm a doubting thomas,
I'll take your promise,
Though I know nothin's safe,
Oh me of little faith” 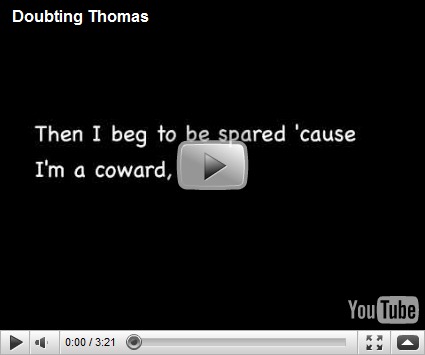