New Album Review: The Hold Steady - “Heaven is Whenever” 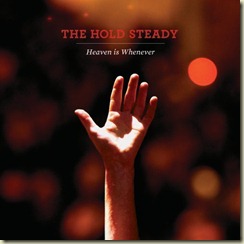 A little background on The Hold Steady. Lead singer Craig Finn’s voice is nasally and gruff, like he has a cold. He always sounds a couple beers deep. To steal from Rolling Stone, he looks like an IT guy. There’s no one in music today who looks less like he’s in music today than Craig Finn. I’m attaching a live video of The Hold Steady performing on David Letterman last week just for a visual here, because I think it’s important. The Hold Steady have been spinning lyrical masterpieces and telling stories for five albums now. They are difficult to get your mind around because their stories and their albums have common themes and characters. Among these characters are Charlemagne and Hallelujah, who goes by Holly. There are also heavy religious overtones in their music, and the Saints, particularly St. Theresa and St. Paul, make numerous appearances. What makes The Hold Steady so special is not just that they tell stories, it’s the way they lyrically describe them and the vocal delivery. Finn sings in a matter-of-fact style that makes you feel like he’s just telling you a story at a bar. In one of my favorite songs of all time—“First Night” off of Boys & Girls in America—Finn sings “Holly’s not invincible/in fact she’s in the hospital/not far from the bar where we met”. Finn has a taste for humor as well, but his stories don’t lose their visuals. On “Stevie Nix” he writes “You came into the ER drinking gin from a jam jar/the nurse is making jokes about the ER being an after-bar!”. His modern takes on the Bible are also humorous without being sacrilegious: take “Cattle and the Creeping Things” where he says “I guess I heard about original sin/I heard the dude blamed the chick/I heard the chick blamed the snake/and I heard they were naked when they got busted/and I heard things ain’t been the same since…”. These songs wouldn’t work if they didn’t-frickin’-rock, ya know? The fact is that the stories can be overwhelming and require too much from listeners who don’t want to put in the effort to interpret them, so it’s important to know that The Hold Steady can and will rock your face off with a flat out classic rock style.

The temptation is to turn this into an essay on The Hold Steady, which would be fine since they are in a category of bands for me that are so loved that I own a t-shirt. Yes, I own a shirt. It has a bear on it. For some reason. I’m going to sport it in the front row in about three weeks. However, I realize this is a review of new album Heaven is Whenever, and up till now it hasn’t been mentioned. Forgive me.

A dangerous thing to say is that this is the most “accessible” Hold Steady album yet, which is often translated as most “radio-ready”. Well, I do imagine it can be the most listenable album yet, but I don’t think the radio will quite take hold of it. Opening track “The Sweet Part of the City” is a masterpiece in itself. The word “sweet” in this sense is used like you might say “this is a sweet party”. Why is the this the sweet part of the city? Because it’s the part with the bars and the restaurants, of course. The song is nostalgic. It’s a throwback to a great time in someone’s life when they had a great place to stay and they use to just go to matinees and fall asleep. On “Weekenders” Finn self-deprecates with such a great sense of self-awareness, singing “I’m pretty I wasn’t your first choice/I think I was the last one remaining”. “Hurricane J” rocks, but it does so with a sensitive side. It’s a message of warning to girl going nowhere with no one. “But 22 and banging round in restaurants ain’t much prettier than banging round in bars” he says. “Barely Breathing” swarms round, “Our Whole Lives” claims “we’re good guys/but we can’t be good every night”, and on “Slight Discomfort” Finn laments the demise of a friend (possibly the same one in “Hurricane J”) by dropping this moving line:

Sincerity. Stories. Depth. Spirituality. Bars. Booze. Rock. Poetry. Pianos. Guitars. The best lyrics this side of Conor Oberst. That’s what you get with The Hold Steady. The scary part? This is probably their third best album of five. That’s how good “Separation Sunday” and “Boys & Girls in America” were. But consider “Heaven is Whenever” a solid addition to a marvelous career that won’t just stop. If you’ve never heard The Hold Steady before, give them a shot. It might just change your musical life. 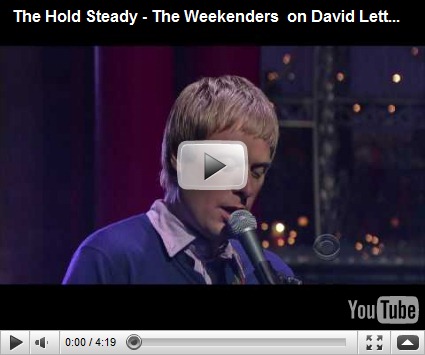 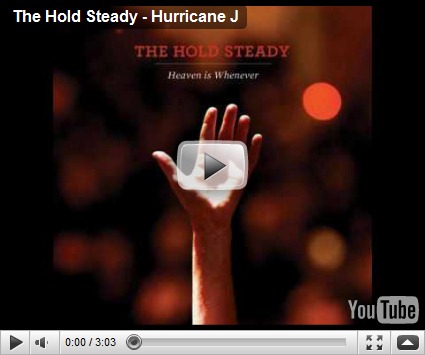