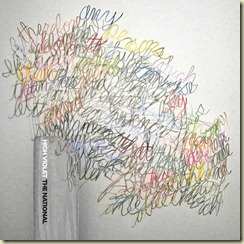 It’s probably safe to say that the lead singer of The National has a voice that’s difficult to get used to. Usually people say this about those who sing poorly or go with the high, nasally style. That’s not the case at all with Matt Berninger. Berninger’s “problem” is that he sings in a distinctive deep baritone. It’s off-putting at first, perhaps only because it’s not typical. Face it, you hear plenty of tenors. Most male leads’ range falls somewhere between high and very high. However, take a few listens to High Violet, adjust, and recognize it as another worthy addition to what’s shaping up to be the best music year in a good while.

The music here is lush. Resting behind the seemingly straightforward alt rock moodiness is a deep soundscape full of details that seem to emerge more and more with each listen. On the album’s second track, “Sorrow”, there’s the soft background piano and smooth flow of the cymbal. The music makes this song, providing it with a perfect night-driving swiftness as it bursts into the “oooooh aaaaaahs” towards the back end.

Lyrically is where The National thrive, however, although no one would argue that without the music the lyrics would be a waste of time. But The National come to songwriting with such an approachability. This approachability is brought about by their ability to seem, well, so normal. Have you ever noticed that country singers always have wives and kids and home life problems, while rock singers are usually singing about their latest freewheeling escapades? Not The National. They have families. They have wives. They have insecurities about their families and their wives. They get depressed, but it seems more real because they get depressed about normal things. With The National, “normal” is a strength. On “Afraid of Everyone” they write “With my kid on my shoulders I try/Not to hurt anybody I like”, tackling insecurity in fatherhood. On “Conversation 16” they sing “I’ll try to be more romantic…I was less than amazing”, tackling insecurity as a husband as well. Oh sure, I could sit here and accuse The National of being wimps, but I’d rather compliment them on their normalcy. Unlike a lot of lead singers in music I’m not promiscuous and I’ve never done drugs. So hello The National, it’s nice to relate.

After five or six listens I’m struck that there just aren’t any weak tracks here. I’d happily listen to the “worst” track on the album, whichever one that might be. On “Terrible Love” a tired sounding Berninger wails over a moving build-up of guitars, piano, pulsating drums, and keyboard that he “Can’t fall asleep/without a little help/It takes a while/to settle down”. On “Anyone’s Ghost” The National write “Go out at night with your headphones on, again” and create the perfect moody backdrop before shrugging “You said I came close/as close as anyone’s come”. On “Lemonworld” he sings “I gave my heart to the Army/the only sentimental thing I could think of” on a song, best as I and others on the web can tell, that is about a disaffected kid returning to the city from the war with no idea what to do (“So happy I was invited/give me a reason to get out of the city” and “Too tired to drive anyway, anyway right now”). The best of the bunch, at least today since I seem to change my mind every other day, is probably the amazing “Bloodbuzz Ohio”, where even financials trials don’t escape Berninger when he drops the smart lyric “I still owe money/to the money/to the money I owe” over a soaring mix of drums, horns, and guitars.

The strong songs just don’t stop coming on this album. “England” and “Runaway” slow the tempo down, but do it beautifully and movingly. On “England” the horns and the strings in particular make it musically the most pleasant of the bunch. Just watch the live video below and be amazed by a band that brings the strings, horns, and piano on stage instead of some pre-recorded track. It makes the lovely instrumentation even lovelier. Second to “England” is “Vanderlyle Crybaby Geeks”, which takes an otherwise downtrodden mood and turns it hopeful, swarming upwards with strings.

On High Violet, The National move from mere decent indie rock band to holding a full force place on my “favorite bands” list. Previously known just for being that-band-with-the-low-voice-and-that-song-Fake-Empire-that-I-like, The National have earned a promotion with an album full of amazing song after amazing song. This kind of consistency, instrumentation, emotional depth, and, yes, normalcy is such a rare, rare thing in music today. 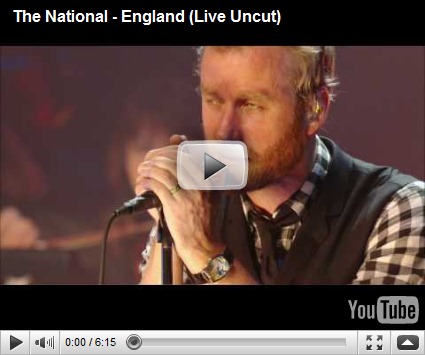