Phew, day two is complete! Can’t believe we still have one more day left. Yesterday was a little different than the first since it was more focused around hopping stage to stage checking out up-and-coming bands, at least for the beginning of the day. And I’d say, considering the intensity of day #1, we look pretty good as we sat down to catch Caribou: 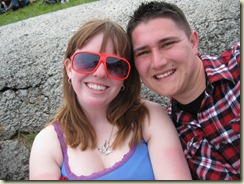 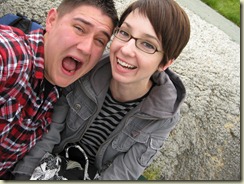 Caribou was good, and I checked out Dinosaur Feathers, who I think has some potential. The first big one of the day was Local Natives, and judging by the crowd, everyone else thought they were the first big one too. They put on an amazing show and I think that of all the “small bands” we saw that this is the one who will be on the main stage in coming years. 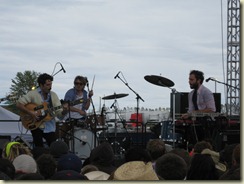 Wanna know something even cooler? I found the lead singer chilling in the lawn a few hours later! 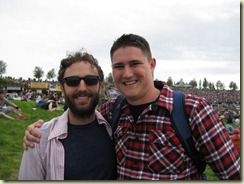 Holly got her hip-hop fix in with the performance by Kid Cudi, which left Holly down in the thick of the main stage crowd and Seth, Anna, and I chilling on the lawn watching as a dance party swarmed in around us! 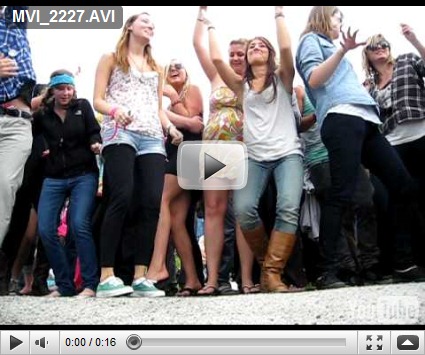 I took a quick nap during tUnE-yArDs (weird) and then caught a sound-problem riddled Freelance Whales concert. I love those guys, so it was sad to watch them get all flustered. Buuuut, by the time they broke into “Generator ^ Second Floor”, they were in full form.

Holly brought out the pickle again too. 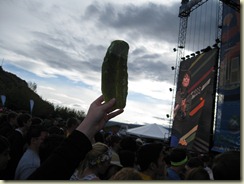 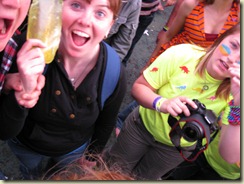 The day really started to crank when I had the pleasure of watching my all-time favorite song—“All My Friends” by LCD Soundsystem—in concert from only a few feet away. What a show. I knew they had a good live reputation, but my word. Very, very good. It was a crazy dance party that never stopped, and when they saved my favorite song for the end, I was sent out happy. 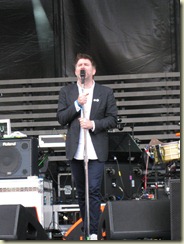 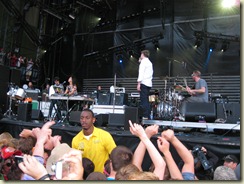 I had to laugh because by the end of LCD Soundsystem I was essentially in the front row. The next band on the docket was Pavement, and they are SUPPOSEDLY a big deal, but I gladly gave away my spot. I just don’t get Pavement. They are not good. Feel free to disagree.

Still no shortage on fine looking weirdos this year either! Here' are the two top shots from yesterday, the latter taken at a Public Enemy (yes, Flavor Flav!!!!) show.

The final show of the day wasn’t as much a personal favorite like LCD Soundsystem, but you can’t touch Massive Attack when it comes to putting on a straight-up performance. It was something else. The lights, the sounds, the guest stars…it was crazy. Massive Attack is probably worth $70 just on their own. Still, much like the end of the day before, here’s what we ended up looking like: 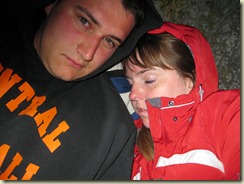 Nothing was stopping us from getting some food though, and although Taco Bell and Wendy’s proved to be bad at being open late, Jack in the Box was ready to give us “Big Cheese”. 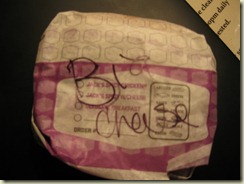 Today’s agenda: Passion Pit, She & Him (Zooey Deschanel!), Band of Horses, and MGMT!!!