A big congrats to my little sister for graduating college this past weekend! Pretty cool to see. Couple observations from the Boise State University ceremony:

1) Only one Fiesta Bowl reference. I think the over/under was probably three references, so props to the Boise State faculty and administration for doing a better job than the folks who run the local Walmart that plays the Fiesta Bowl on repeat when it comes to not slamming the Boise State-Oklahoma game down the world’s throat.

2) Where do they find professional linguists? The two they had announcing names deserve major kudos. I don’t think they messed up a single name, and one girl from India had five long, complicated names.

3) At some point Boise State will have to end there attachment to saying every. single. name. They said almost 2000 names.

4) During the reception my wife started tapping me on the elbow repeating “cute girl cute girl cute girl”. I confusedly turned to see a really cute girl walking by. Nothing confuses a man more than how he’s supposed to react when his wife tells him to check a girl out…

It’s going to take me a little while to get some of these music reviews out. Why? Because May has been the greatest music month of my life. I already have The Hold Steady, Minus the Bear, The New Pornographers, The National, and Broken Social Scene. LCD Soundsystem and Band of Horses were released today. I’ve never in my life had this many favorite bands release albums in a single month.

Revision to my Mountain Home Guide! Never, ever take out-of-town visitors through the first or third exits. The only freeway exit suitable for guests is the second exit. If you come through the first exit you see a long line of auto shops and train tracks. The third exit is even worse. At least with exit #2 you get the eateries, the stores, and some churches.

Jay-Z has a “new” song where a British guy sings Alphaville’s “Forever Young” in the background. The “Forever Young” refrain is clearly the best part of the song. Am I the only one who gets annoyed when hip-hop artists just rap over good 80’s songs and collect the checks?

Anyone who didn’t see 88 year old Betty White host Saturday Night Live needs to start perusing the web for the clips. Her monologue rant against facebook was classic stuff. I can’t embed it, but here’s a link:

Song recommendation for the road! Great one from The National called “Afraid of Everyone”. 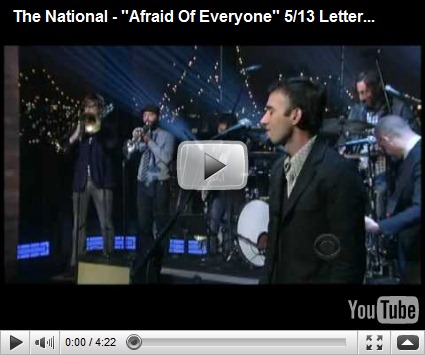