I have no shame in writing this review. Let me make that clear from the start. I will not hate Twilight just because it is, well, Twilight. Regardless, the soundtrack has nothing to do with how much time the movies spend showing Edward sparkle or Bella biting her bottom lip. In fact, historically the soundtracks have been very strong, and the soundtrack to New Moon even came in at #4 on my top albums of 2009 after it featured extremely strong tracks from Thom Yorke, Bon Iver, and Grizzly Bear. Even the slightly weaker debut soundtrack to the initial movie featured great tracks from Paramore, Blue Foundation, and Black Ghosts. I remember watching New Moon, which I detested as a movie overall, and realizing the only parts of the movie I enjoyed were those that featured the great songs from its soundtrack.

The soundtrack to Twilight: Eclipse continues a tradition of strong soundtracks, though overall it does not compare to its predecessor. Here the songs are mostly good but lack the strength of singular tracks like the Grizzly Bear/Beach House collaboration “Slow Life” or Lykke Li’s haunting “Possibility”. Star power this album still has though, featuring tracks from Muse, The Bravery, Vampire Weekend, and Band of Horses. What this album does well, though, is crank out songs with consistency, which the first soundtrack did not.

The album’s opener challenges for the best of the bunch. When Metric’s “Eclipse (All Yours)” soars into the chorus on the back of Broken Social Scene’s Emily Haines’ voice, it makes for a perfect start. What could be a promising back-to-back duo of Muse and The Bravery, though, proves disappointing. Muse falls into their predictable trap and pattern here, belting into an overdramatic song comparing love to a neutron star collision, or something like that. The Bravery follow it up with “Ours”, which unfortunately sounds like it was a castoff from their album.

Things do start looking up, fortunately. When the deep voice of Florence and the Machine sweeps into the snare-drum pounding “Heavy in Your Arms” it’s hard not to get into it. And when Sia unleashes her string-laced and soft piano gem “My Love”, we’ve had the best two-song combo on the album, and both from unexpected places. And once the album endures the disappointing threesome of Fanfarlo, The Black Keys, and The Dead Weather (which is really a bummer, considering Jack White is the albums best musician), it’s all smooth sailing to the finish. Beck and Bat Lashes combine on a great 80’s-ish track “Let’s Get Lost”. Vampire Weekend write what is, in my opinion, their best song yet, mandolin and all. “Jonathan Low” is proof to me on what kind of potential Vampire Weekend have in them, since apparently everyone but me is enamored with them. Unkle’s “With You in My Head” and Eastern Conference Champions’ “A Million Miles an Hour” provide two solid tracks from two generally unknown bands, though Eastern Conference Champions could probably avoid completely imitating Radiohead. Band of Horses, who seem incapable of writing a bad song, contribute the wistful “Life on Earth” while Cee Lo Green of Gnarls Barkley fame scores an odd gem on “What Part of Forever”.

Often overlooked in Twilight too, is how great the score is, whether that be Carter Burwell (No Country for Old Men, Fargo), Alexandre Desplat (Girl With the Pearl Earring, The Queen, Fantastic Mr. Fox), and now Howard Shore (Lord of the Rings, The Departed, Gangs of New York). The soundtrack, like those before it, features one track from Howard Shore, and I don’t think it’s a bad thing to introduce tweens to some good classical compositions, even if they are called “Jacob’s Song”.

I don’t know if Twilight: Eclipse will place on my year’s end Top 10 or not since this has been such a strong music year. But the sound track is perfectly good, albeit lacking in superstar tracks. However, it’s consistently heavy on good songs by good artists, and it’s a welcome addition to my collection. 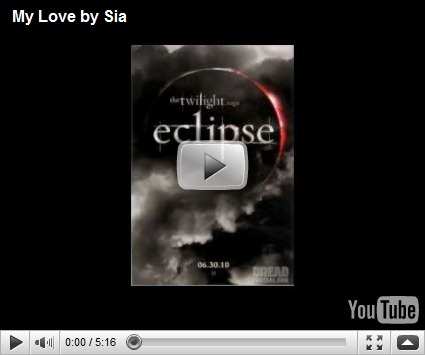 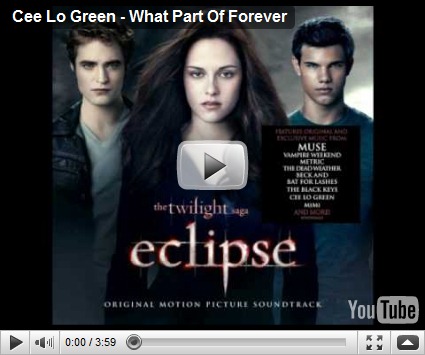