The straightforward, no-frills guitars-and-drums style of Gaslight Anthem evokes Bruce Springsteen references wherever it is discussed. The Gaslight Anthem don’t dabble in electronics/sythns or what some folks would call gimmicks. Nothing but the gruff, throaty vocals of Brian Fallon and the spirit of rock and roll.

Gaslight Anthem’s previous album, The ‘59 Sound, was full of some strong tracks, but fell short of being a memorable overall album. The good news for Gaslight Anthem is that with “American Slang” they come up with an album that’s once again full of strong tracks, but this time a little more consistently. Nostalgia and storytelling are rampant, churning forth songs about blue-collar city folk and singing lines like “my queen of the Bronx”, “the lights go low on the avenue”, and “American girls, they want the whole world”. If America has it’s own mythology outside of country music, then leave it to the Bruce Springsteens, Hold Steadys, and Gaslight Anthems of the world to tap it.

Stunning tracks like “The Queen of Lower Chelsea” highlight the band at its best, combining the elements of storytelling and a memorable-yet-simple guitar riff. The toe-tapping wonder of “The Diamond Church Street Choir” shows a band with chaps, mastering the syncopation and verbal phrasing as Fallon writes “But the beat never leaves/and the tempo’s a relief/to my aching bones, rambling all over”. On “Boxer” and “Old Haunts” the nostalgia flows free, with the characters in the songs delivering tines like “Remember them songs/and the reasons we were singing” and “God help the man who says/’if you’d have know me when…’”. By the time Gaslight Anthem drop a line “the cool is dead, baby” on “The Spirit of Jazz”, you’re convinced they have the cred to make such a statement.

I don’t believe The Gaslight Anthem are going to change the world, but like their contemporaries, the superior band The Hold Steady, they show that some bands feel that straight-laced rock and roll doesn’t have to choose between the synth-rock of bands like The Killers or the self-loathing pop-rock of bands like Three Days Grace. Give the song below a shot, and if you like it you’ll probably like the rest. 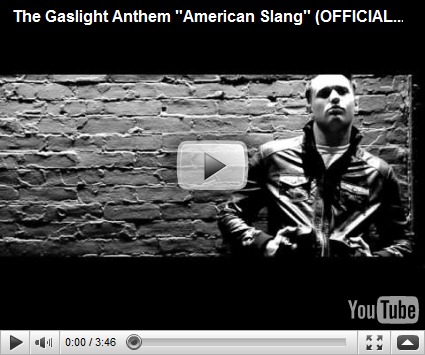