You know what’s a little awkward? In a military move they send people out to pack all your stuff. On one hand, this is awesome. On the other hand, I’m not supposed to do anything, so I’ve been relegated to sitting here and watching as they work their tails off. I might as well get out the shades, get a drink with an umbrella in it, and kick my feet up. Fortunately for me, I have two things going for me. First, “packers” and “movers” are separate things, so the packers are here doing the small, box-able items. This means my couch is still safe and sound at this point. Second, although my internet is down now, I’m happy to report that “Jeffery” has kept his wireless internet unsecured, so I’m happily leeching so that I can blog while I sit here awkwardly.

Yesterday was my last day with my Materiel Management Flight at work. It was a pretty emotional day for me, though I made it through without tears. I think I’m a decently emotional guy—at least comparatively—but there were no tears. Part of me wishes I could’ve mustered some for the people who think that things don’t effect you unless you’re crying. But it was a hard day….and I’ve had far too many hard days lately. This week has been a whirlwind. I’m physically exhausted from working on the house from sunrise to sunset. And after saying goodbye to my co-workers, my friends, my flight, my minions of elementary schoolers at Bible Buzz, and the church, I’m so, so done with saying goodbye. I’m looking very much forward to landing in Seattle tomorrow night and just taking it easy for a couple weeks.

Hello Seattle-ites, do I have some plans for you. Two Mariners games? A couple hikes? The beach? I want to go here: 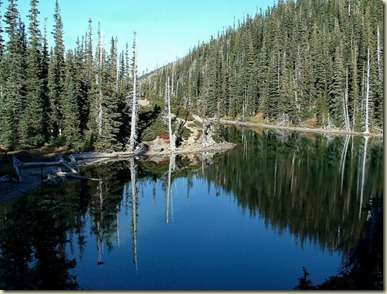 That, my friends, is Moose Lake in the Olympic National Park. It’s a hike I did with my dad a long time ago. If I have my way, I’ll be going back soon. You just can’t beat an alpine lake, ya know? Idaho has a lot of nice things, but what they really lack is trees and naturally occurring water. Heading to the “water” around here plants you at a man-made reservoir. Man-made reservoirs just never look that pretty.

I’m looking forward to hitting the road and checking out some of the sights of America in places I’ve never been. We’ll be doing Grand Teton National Park, Mt. Rushmore, Jewel and Wind Cave, Badlands National Park, Memorial Stadium in Lincoln, the most famous BBQ place in the US in Kansas City, The Gateway Arch, and whatever random places we fine. Yes, I know what you’re thinking: “please, Derek, do a travel blog!”. (Wait, you weren’t thinking that?). Well, have no fear, I’m certain that I would be happy to pass the time at the hotels with a little travel blog action.

Well, Holly has taken our poor cat into the backyard to ease the pain. He’s been trapped in his carrier in the back room while the packers are here. Yup, he’s pretty miserable. But they’re almost done with the kitchen, so hopefully this won’t go too far after lunch. It’s going to be a late night, probably, since we have just tonight and tomorrow morning to get the house ready for our final inspection. When I land in Seattle tomorrow I’m going to be exhausted. I already am.