With “Real Life Color” Magic Man have made an album about as Postal Service-y as Postal Service, only without Ben Gibbard’s lyrical chops and sans the energy. Still, Magic Man’s soft melodies are occasionally fantastic, like on the tracks “South Dakota” and “Monsters”. The album as a whole tends to blend together as the all-too-similar songs start to become indistinguishable from themselves. All in all, Magic Man give us one of the year’s best tracks in “South Dakota” and flash significant promise.

Caribou is hard to peg. This is chiefly because Caribou are an electronic rock outfit that, when they sing, feature vocals from a man that has doctorate in mathematics. While many of the songs would be wasted space on your hard drive if you aren’t a fan of vocal-less electronic music, you’d be missing a few stunning gems if you ignore Caribou completely. Two of the year’s very best tracks, “Odessa” and “Jamelia”, are featured here among some other great ones. “Jamelia” in itself is the object of my personal obsession right now simply because of the swarming and passionate piece of musical bliss that happens right around the 1:43 mark. You’d be spending the best $2 of your day if you download those two songs, and if you like them you might just enjoy the rest of the album.

Nickel Creek has always been my weakness. I love them. I love almost everything they’ve ever done. And, because of this, their “hiatus” has been insufferable. The worst part is that their three members have been off writing sub-par solo music. While Sara and Sean Watkins each have their own work, no one has been more prolific than Chris Thile, mandolin player extraordinaire, and probably the most important piece of Nickel Creek. Which is why I keep giving Chris Thile’s work a chance. Maybe I should just stop. There’s nothing inherently wrong with “Antifogmatic”. It’s not terrible or anything. It’s just not Nickel Creek. You get teases and glimpses sometimes, though. “You Are”, “Missy”, and “This is the Song (Good Luck)” would both be welcome filler on a solid Nickel Creek album. But the album is, to be frank, a little on the boring side, and it breaks my disappointed heart to say that. Please Nickel Creek, come back soon. I’ll be lined up outside Best Buy when you do. 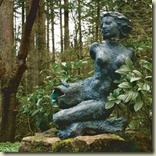 Hearing the absolutely fantastic “Five Little Rooms” on some random music blog not too long ago made my day. It’s piano beat, deep horns, and imagery acted as the backbone to a little slice of indie wonder. Being that we had a little cross country road trip coming up I bought the album merely because of that one song, a move that works out only about once every seven tries. And, despite a few good tracks, this wasn’t one of the times it worked out. Certainly “Tithe”, “BOTE”, and “Intil” are serviceable enough. The problem, as I see it anyways, is that the band shares three-way singing duties. Much like Goo Goo Dolls are only the Goo Goo Dolls when the much-more-famous Johnny Rzeznik sings instead of that terrible other guy in the band, Menomena is cursed by sharing the singing duties amongst three not-equal singers. Creativity is all over the place here, and good reviews give them credit for as much, but I for one just have to admit that beyond the wonderfully brilliant “Five Little Rooms”, this album is a bit of a disappointment. 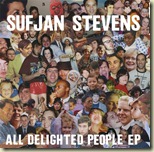 He’s baaaaaaack! Sufjan Stevens, indie god, has returned with an eight-track EP, which precedes a full length album due in the very near future (yay!). Consider this EP an appetizer. And as far as appetizers go, Sufjan Stevens does it better than most people’s main course. He starts the EP in typical fashion with the multi-instrumentalized 11.5 minute romp “All Delighted People”, which perhaps one day I’ll stop being overwhelmed by. And while the album is short, Stevens stuffs the middle with three gems. “Heirloom” keeps in strikingly simple compared to the opener, with barely more than Stevens’ soft vocals and an acoustic guitar. On “Heirloom” Stevens brings the same wounded sense he gave so wonderfully to all-time great track “Casimir Pulaski Day” when he sings “Do I always think I’m right? Oh no I never meant to be a pest to anyone this time. I only meant to be a friend to everyone this time.” Anyone who' has every had their intentions misunderstood can relate not just in words, but in feeling. “From the Mouth of Gabriel” is nearly as good and “The Owl and the Tanager” is dark, foreboding, and moody, primarily when Stevens shamefully and softly sings “and your father called to yell at me/’you little boy, you little boy’”. The album may just be a tease for what’s about to come in the approaching weeks, and what a solid tease it is.