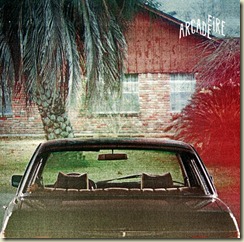 “I know it’s heavy, I know it ain’t light, but how you gonna lift it with your arms folded tight?”

I’m a little anxious beginning to review this album. For one thing, I feel like it’s the kind of album that probably takes twenty listens to really grasp. I’m on listen number 12, probably. At this point I don’t really know if this album is my favorite Arcade Fire album or whether I’m still caught up in the excitement. The album is so rich in storytelling, depth, passion, music, etc. that there is more and more there each time I listen. But, at some point, you just gotta go for it.

“The Suburbs” focuses it’s concept album attention on it’s title character: the suburbs. The album switches perspective, criticizes, compliments, romanticizes, and tears down. It’s one of those albums where you’re sure the band is trying to make a point, but when the perspective keeps switching you’re never quite sure what that point is. That is, until the final (and 16th) track.

The album starts out with the opening track “The Suburbs, which introduces us to a person trying to escape the youth, the boredom, and inevitable death of suburbia to the tune of a loungy piano and subtle strings. “Grab your mother’s keys/we’re leaving” he says. Second track “Ready to Start” finds the band at the cusp of success now that they’ve escaped the suburbs, where they deliver the fantastically self-aware line “Businessmen drink my blood/Like the kids in art school said they would”. By track three lead singer Win Butler has become a full-fledged “Modern Man”, despite the uncomfortable feelings he associates with it. “Rococo” turns its attention to the “modern kids” of suburbia with a condescending and haunting take on modern youth (“They will eat right out of your hands/using big words that they don’t understand”). As if it weren’t obvious enough that they were speaking of the suburban mall crowd that knows far more about Ke$ha than what is happening in Pakistan right now is or who Alexander Hamilton was, Butler puts on his best terrified tone and gasps “Oh my dear god what is that horrible song they’re singing?”.

The sunny strings that electrify the opening of “Empty Room” lead only to a passionate song of loneliness from both Win Butler and wife Régine Chassagne. The song ends with the French phrase “Toute ma vie est avec toi/Moi j'attends, toi tu pars”, which roughly translates to “All my life, is with you/Me I wait, You you go” fading out in the background. Self-doubt starts to creep in to Butler’s song in “City With No Children”, where the previously critical art school student that you find in “Ready to Start” and “Rococo” sings “You never trust a millionaire quoting the sermon on the mount/I used to think I was not like them/but I'm beginning to have my doubts/my doubts about it”. Ominous songs “Half Light I” and “Half Light II (No Celebration)” deal with the idea of emerging into understanding, and not being exactly impressed with the world when they do understand. There’s definitely a longing for innocence held beneath these songs, which use synth strings and pulsating beats to perfection. On “Suburban War” we get a taste of nostalgia where Butler drives back through the suburbs he “escaped” from at the beginning, and he finally has a hint of sadness as he realizes his town and old friends don’t recognize him anymore. “Month of May” returns once again to criticizing the kids, but this time does it with perhaps the most rock and roll Arcade Fire song in their discography. This time it’s the kids who all threaten revolution and speak of anger but still “stand with their arms folded tight”.

Going song by song through an entire 16 song album can get quite long, so I’ll only get into a few more things. First, musically the best song might be found in “Sprawl II (Mountains Beyond Mountains)”, a positively 80’s synth rocker fronted by Butler’s wife. It’s a fantastic piece of music, especially when bumped up lyrically with “Sprawl I (Flatlands). The song is about being a kid again. It’s where the whole album starts to come together. The album begins to take light and we see it for what is: it’s an album about wanting to grow up, escape the monotony and boredom of small towns, long for bigger things, and dismiss suburbia as childishness nonsense, only to realize how much you miss home and long for those feelings of boredom. The key to understanding this story lies in “Wasted Hours” and the concluding song “The Suburbs (Continued”. In “Wasted Hours” he sings “What was that line you said? Wishing you were anywhere but here/You watched the life you're living disappear.” Butler sings of how they escape the town because all it was wasted, boring hours. But a self-aware Butler acknowledges something on the final track:

You can run away from something your whole life, and then spend an awful long time trying to run right back to the very place you were trying to escape from the whole time. 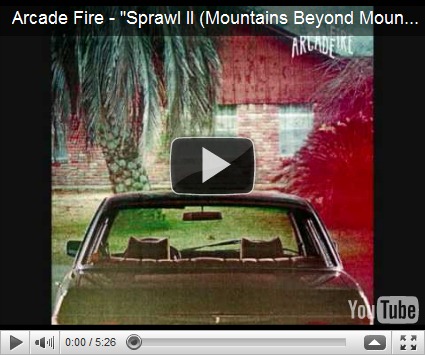