Today’s day was made much shorter because yesterday we drove a couple extra hours, and I’m definitely thankful for that. I guess I was just riding that Tom Osborne high. So this morning we started the day by visiting the house where the legendary outlaw Jesse James was shot in a rundown historic district in St. Joseph. It was an odd little place, but worth the $3 each just to see the famous bullet hole, which due to previous owners allowing visitors to touch, has not become a bullet gash in the wall. 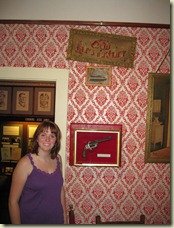 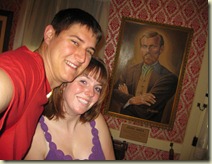 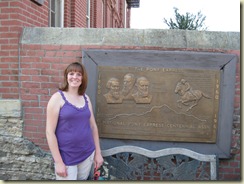 Then we went down to Kansas City where I was very excited to eat at what very well might be the world’s most famous BBQ joint, Arthur Bryant’s. 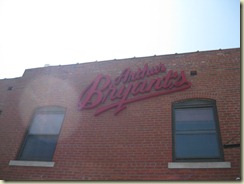 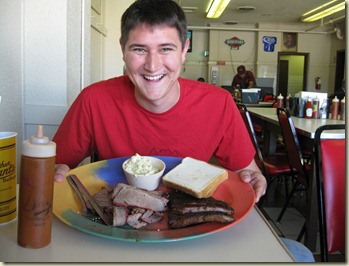 Ugggh, look at that hair. No worries, I got that taken care of tonight. Back in regs!

We then scurried up to Independence for a little taste of history. I find it intereseting that we have essentially tracked the Oregon trail, from starting right near Glenn’s Ferry in Idaho to moving down the Missouri River where Lewis and Clark first put their boat in the water to now reaching Independence, where this courthouse is featured in the very beginning of the Oregon Trail game. 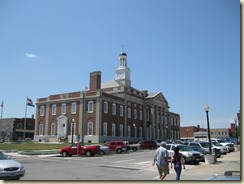 All this history made my wife a very happy woman, and that is a good thing of course! 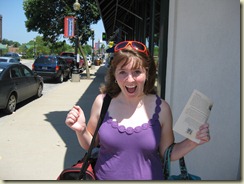 We then got ourselves some tickets to tour the Truman House on the block where Harry Truman and his wife both grew up on. 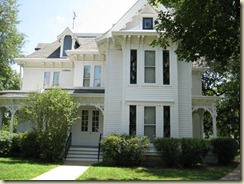 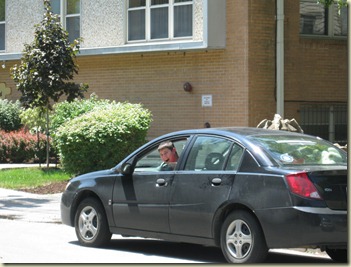 When she came back I got my turn and learned a couple things:

1) My tour guide, who seemed like she was probably about 20ish, did not like Barack Obama. Why? Because, as she tells it, he visited Independence and decided to make an unplanned tour of the Truman House. Apparently they let him walk all over the untouchable parts of the house without sanitary “booties”. Since there was only three of us on the tour I made the comment that, well, hey, he’s the President so I guess he runs the National Park system. Au contraire, she tells us, this was when he was campaigning, which meant that he was merely a visiting senator from another state. I loved how she told this story without a hint of political leanings. She simply did not like him because he was not a rule follower.

2) I’m now supposed to look for my tour guide’s sister at the Gateway Arch tomorrow, where she sells tickets.

3) I think the tour guide liked me….maybe? Potentially? I like to think it’s at least a possibility that a tour guide could like me. I don’t really get hit on much. But I suspect flirtation!

4) Oh, uh, Harry Truman…I should say something about Harry Truman…uh…well, I liked his study! I could study in that study.

So there we have it. Not a bad day. And may I say, the La Quinta in Maryland Heights, Missouri, is a very nice hotel. Thanks Luke for the recommendation! Tomorrow we hit up the Gateway Arch and some random places. I’m also nervous and excited to see Dayton, our new home, for the first time. Until tomorrow night, thanks for reading!!!