Well well, back to blogging I go. I’m sorry to my 12 faithful readers for my less-than-usual postings as I get settled here in Ohio. But the boxes are 99% unpacked, the rooms of the house have taken shape, and all my paperwork errands seem to be complete, so life can now start to return to normalcy. Normalcy, to me at least, means blogging about stupid things and begging people to read about them.

There’s lots to like about Ohio, most notably the following things: 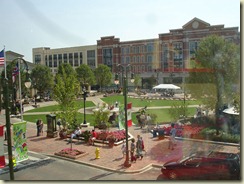 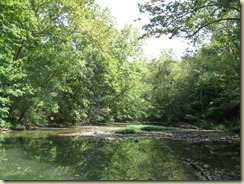 Bust most of all, I’m a big fan of my WORK SCHEDULE. You see, here is what I’m doing currently. In the month of September we have what they call “technical refresher” courses. This week this means that from 2 PM until 3 PM I’m taking an advanced Microsoft Excel course. Other than that my job is to watch online algebra review videos at home. I think one picture can show you why this is so fantastic: 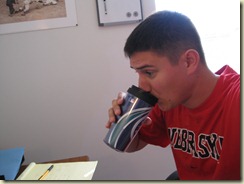 That’s me working on my math homework (legal pad has math on it), while sitting in my pajamas and sipping fresh brewed coffee from my Mariners cup. This picture was taken approximately 11:30 AM on a Wednesday. I’ve set up a nice little office to make home learning more accessible. Check out the decor! I feel like I’m at the crossroads between “professional office” and “college dorm”, so I’ve attempted a fusion of decor. 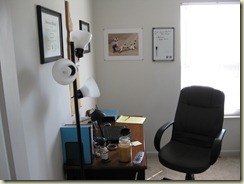 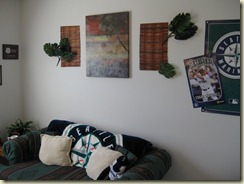 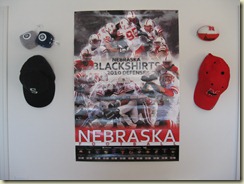 Not sure what the best touch is…it’s either the palm-ish fronds or it’s the placement of the Declaration of Independence directly behind my laptop.

Of course, having a work schedule like this has made me feel a touch of purposelessness. Typically I pour myself into my work and do everything I can do to the best job possible as much as I can. That’s how I approached my flight back in Mtn Home, which gave me plenty of work to do and much less time to do it. So I’ve poured myself into what I call “Operation Green Lawn”. When we moved into the house the lawn hadn’t been watered in a while and was covered in patches of disease. I’ve been attempting to nurse it back to health without the benefit of an Idaho watering system. This is the Ohio watering system: 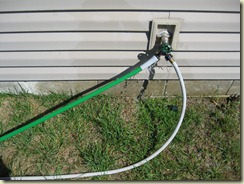 But here’s a picture of the success so far! Naturally looking at the neighbors’ yards gives you the best comparison. 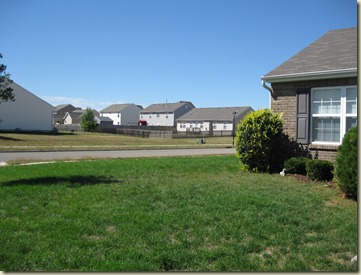 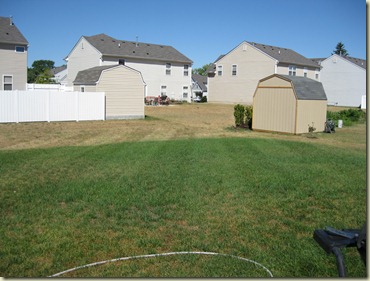 Elections are coming up! I was kind of hoping to vote in Ohio so I could finally be in a swing state, but that’s not going to happen. I’ve lived in Washington, Oregon, and Idaho, and those states don’t change colors very often. But who knows this year. I’m very happy to have to opportunity to vote Patty Murray out of office back in Washington. It’s shaping up to be an interesting election for Democrats, who are finding out quickly that sometimes the only thing worse than apathy is crushed hope. Americans are known for living in the moment, and it seems to me the more Obama keeps talking about his “inherited” mess the more people roll their eyes and question his leadership. I know I couldn’t get away with blaming predecessors in my job for more than a couple weeks, if that.

Did you that this area of the country is known for taking a sauce-like chili and putting on top of spaghetti noodles then covering it with a mother load of cheese? Yup. They have whole fast food restaurants dedicated to it. It might not be the most amazing thing, but I suppose it’s a change of pace from other fast food.

This weekend I watched “Driving Miss Daisy” for the first time in my life, despite being a movie fanatic who worked at a video store with free rentals for a four year period. I fell into a trap with that one. See, some movies’ titles just make you think that they are meant for a certain audience. This is why “How I Met Your Mother” didn’t appeal to me before I listened to my siblings and began watching the best sitcom on television. I equated “Driving Miss Daisy” with “Steel Magnolias”, “The Divine Secrets of the Ya-Ya Sisterhood”, or “Calendar Girls”. Wrong, wrong, wrong. The movie was sooooo good. Morgan Freeman, you sure can act.

Nothing is more humbling than realizing that the 14 year old version of you was way smarter, or at least had a better memory. Just remembered how divide a fraction by a fraction. Got a 62% on my algebra pretest (no calculators, to be fair) and felt excited that I’d almost gotten 2 out of 3 right when I hadn’t even seen a matrix since sitting next the super hot chick (the 14 year old version of my eventual wife) in Mrs. Clark’s math class at Christ the King Academy in 1999.

Song recommendation comes from Ra Ra Riot’s new album. The song is called “Boy”. Was lucky enough to see these guys open up for Cold War Kids and Death Cab for Cutie last year and they were faithful at replicating their sound live. Probably because they are, you know, actually talented or something. 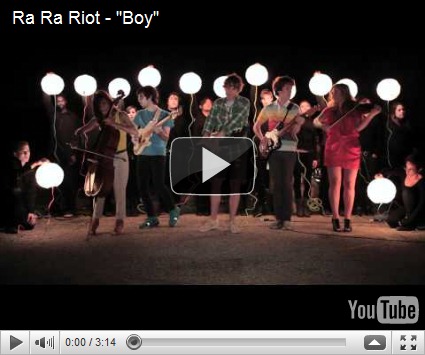