The Subway Sandwich Saga, In Pictures

This is the story of a trip to Subway. The day was August 7th on a hot summer day in Nowheresville, Wyoming on the long journey from Idaho to Ohio. We were bright eyed and excited about the long journey that laid in front of us. The day before this fateful day we had seen such beautiful sights as this: 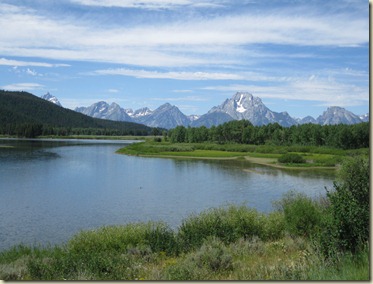 But Wyoming, as many of us have learned, has very little to offer once you leave the beauty that is the northwest corner. Wyoming sold their soul to the devil for Yellowstone National Park and the Tetons, agreeing to let the rest of the state be a hellhole of desert, nothingness, road construction, and, of course, Evil Subways.

It started innocently enough in the Sturgis-overrun community of Newcastle, Wyoming. According to Wikipedia the town has a little over 3,000 and is famous for being the home of The Lillingtons, who are famous enough to have a Wikipedia page of their own apparently. Newcastle also has a Subway franchise.

Lunchtime with a cat took us to Subway, where I made the critical mistake of trying their BBQ pulled pork sandwich. Here’s a picture of Holly consuming her normal and disease-free sub at the picnic area at Jewel Cave. 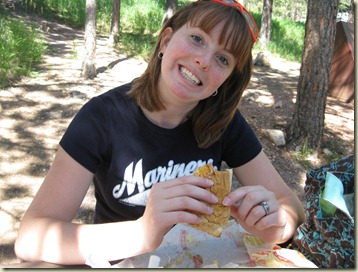 On the other end of that camera is a man who doesn’t know what he’s getting himself into. With every bite he ingests a diseased BBQ pulled pork sandwich, bringing himself closer and closer to a month long saga that he won’t soon forget. Fast forward an hour and here he is fighting off a small stomach ache at Mt Rushmore: 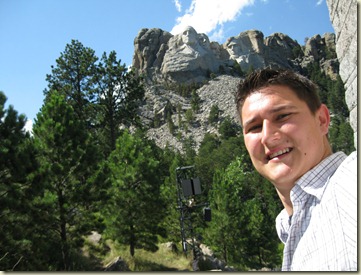 It was down the road that things really starting going badly. The small stomach ache grew and grew. When approaching Wall, SD it turned full force, leaving me so sick that I laid down in bed whimpering while Holly emptied the entire car. As the hours passed, I began to look like this and spend a lot of time here: 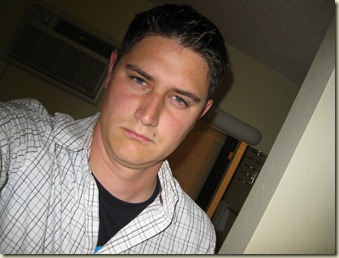 That night, around 2 AM on 8 August I found myself filling out a complaint form at Subway.com. I wasn’t expecting much, but I felt like doing SOMETHING, and when you can’t sleep and have a laptop with an internet connection, well, why not? Three days later, to my surprise, I receive a phone call from the owner of the Newcastle, Wyoming franchise while I was gassing up in Effingham, Illinois.

It was an interesting call. The owner introduced himself and seemed to be apologetic, telling me that it was the first time he’d had a complaint. But the call was filled with interesting comments. He told me three or four times that I could feel better knowing that no one else had complained, and that he had ensured that the pork was of the right temperature. He told me he “had to report something back to corporate” so he wanted to call me. Sincerity was not at a premium in this apology. I told him that I appreciated his call, but also would appreciate a refund on my $11 meal so that I didn’t have to pay money to have a wretched night in a South Dakota Motel 6. He agreed, and took down my parent’s address to send the refund. I was nice to him the whole time and he thanked me for not being “hostile”.

Fast forward about a week and a half. I get a voice mail from him asking me for my address since he lost it. By this time I have my new Ohio address, so I call back and provide his office with my address.

It’s now about a full month since I was promised my refund. I know it’s $11, but it’s the principle of it all now! :-D I got back on the Subway site and re-reported the Newcastle chain for deceiving me about a refund. The next morning I get another call from the owner, confusingly asking me what the problem is. This time I was a whole lot shorter with him, telling him the problem was that he told me I was getting a refund and that I never got the check. He said he asked for my address and I never called back, which was wrong. I told him as much. The sob stories came out now, with him going off about how bad the economy was in Newcastle and how he wished people would move out there. I don’t know what the point was of that. He reiterated that no one else had gotten sick. Now I’m really annoyed. He promised again to send the check. The good news? Finally, on 18 September, forty-one days later, I received the check: 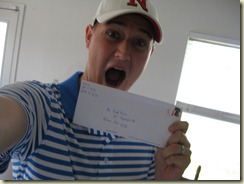 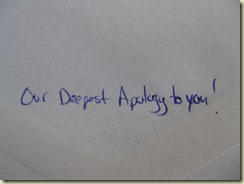 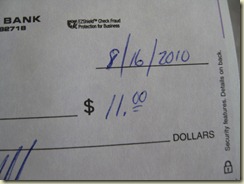 I got to thinking, what is the best way of spending this $11?? I came to the conclusion that there was no more perfect way than this: 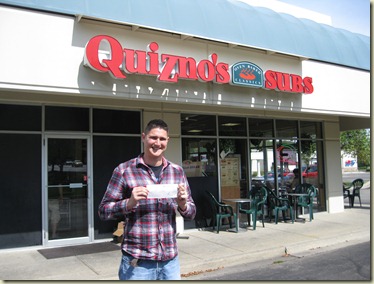 For $11 Holly and I enjoyed two delicious honey bacon club sandwiches at our friendly neighborhood Quizno’s. These friendly workers assured me that my sandwich would be 100% disease free. 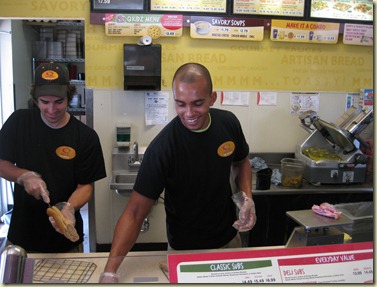 Such great service! The food was delicious. My stomach feels satisfied. Such toasty goodness prepared by a friendly staff! I think Holly and I can be satisfied that this money went to the right place. Thanks Quizno’s! 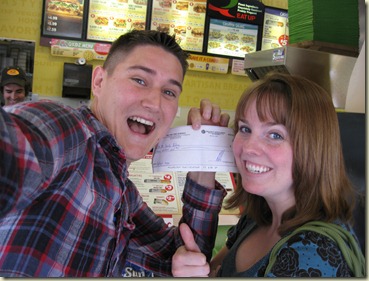