Thoughts on the Passing of Dave Niehaus

The death of Dave Niehaus hit me hard last week. It was Dustin who first alerted me, sending me a text that I never thought I’d get. When these kind of things happen—however inevitable they might be—you always hope for some sort of warning, like a hospitalization, or something. Although he’d had health issues in the past, there was no warning about this one. He was just suddenly, gone.

Now I know that Dave Niehaus is not a household name for many of you. His national name recognition is not near the level of announcers like Al Michaels, Bob Costas, Vin Scully, or even the now departed Jack Buck or Harry Carey. But from 1977 through 2010 Dave Niehaus was the ever-constant voice of the Seattle Mariners.

To understand my connection to this man one has to understand the passion I have for the game of baseball. You see, from the first days of my conscious memory I still remember reading old beat up Mariners programs from the late-80’s, featuring players who weren’t on the team anymore. I imitated batting stances solely from pictures on baseball cards.

Back in the early 90’s I loved basically one activity: baseball. My main connection to this game came in the form of radio broadcasts. My parents didn’t own a tv, and even if they did Mariners games on tv were a rarity back then. I used to listen to every single game that I could, and they play 162 of them. I would sit in my room and keep score. I would listen to them deep into the night, back when 10 PM seemed like it was super late. When we drove places or went camping, we would always have the games on. We were terrible, but I didn’t know better. I always loved to listen, and to this day I still do.

Those who knew me as a kid know I played baseball by myself in the front yard up to an embarrassingly old age. Beyond the probably hilarious scene of a 12 year old throwing a ball in the air, hitting it, running after it, and repeating 100 times was a very detailed and intricate league that ran in my head. And if you watched closely you probably saw my lips moving as I muttered a barely audible impression of announcers announcing my game. And my impression was of one man: Dave Niehaus.

That’s why it breaks my heart to know that he is gone, and it’s why I get emotional just typing this. Even now I don’t think it’s sunk in. I don’t think it will until I tune into the broadcasts next year and he’s not there. I don’t really understand the celebrity culture following, and how people fawn over the details in the lives of the people they’ve never met. But to me Dave Niehaus was different. He is likely the only celebrity that I could shed a tear over, and having him gone right now is hard to shake. I read somewhere that the only person who could accurately describe what it’s like to lose Dave Niehaus was Dave Niehaus. That statement couldn’t be more true.

I’m going to miss you, Dave. I wish I had known before it was the last I heard you yell “fly away”. But my life will always be influenced by your calls, and I will likely have no greater sports memory than of you announcing Edgar Martinez’s double, sending the 10 year old version of me into a frenzy and still giving me goosebumps every time I listen to it to this very day. Goodbye, Dave. 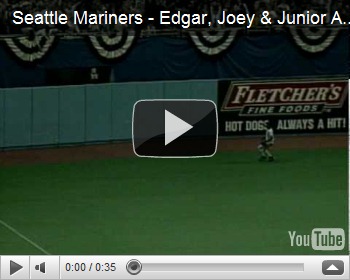