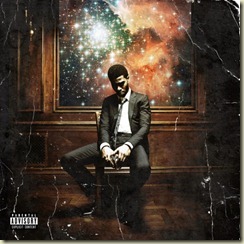 Don’t be scared off by the rating, since the rating applies to the album as a whole and not the outstanding work put in by Kid Cudi on a couple of tracks. Furthermore, when is the last time you saw me review a hip hop (if that’s how you classify this guy) album?

Cudi is mostly known for his hit “Day ‘n Nite”, which featured some catchy electronics and saw mainstream success. He’s also got a little bit of a rep in the indie circles, playing to festivals full of fans who normally would never touch the genre and teaming up on tracks with likes of MGMT and Ratatat. For the most part Cudi falls into the patterns that makes me dislike hip hop, and I’ll admit most of this is because I don’t relate at all to barely anything most hip artists sing about. But underneath it all is an artist who pulls off creativity as well as any of his counterparts, on full display when he teams up with Cee Lo Green for the fantastic “Scott Mescudi vs. the World” or on the album’s best track, “Revofev”. The sounds on songs like “Ghost!”, the atmospheric vibe on “Mr Rager” and the positive 90’s rock vibe on “Erase Me” showcase an artist who transcends genres. Sure, Kid Cudi is hip hop, but barely.

Like many hip hop album, the track list is bloated, checking in at 17 tracks. This is a shame because it waters the good stuff down. A 10 or 11 track album where the bottom feeders are cut could have let to a great album, but as it is there is plenty here to enjoy.