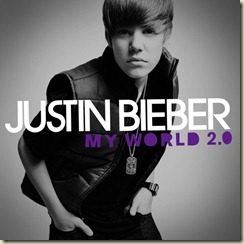 Where do you start when reviewing Justin Bieber? Do we skip straight to the music or do I start by acknowledging his 4-star head of hair? Channeling his inner Donald Trump, Bieber sports a head of hair that one day could charm the nation into considering him for the Republican ticket for President. But for now young Bieber is simply a music factory, turning out smooth pop hits and making fans out of little girls and 25-year old Air Force officers.

“My World 2.0” is the second album to be named “My World” by Justin. Inspired by Microsoft, Bieber plans on releasing update packets for the 2.1, 2.2, 2.3 and so on versions before releasing a whole operating system/album with “My World 3.0”. No word yet on when “My World Vista” will hit the shelves. The first song off the album, “Baby”, is already a smash hit, and features Ludacris, who once worked with Academy Award winners in the feature film “Crash”. This puts Bieber just two degrees of separation from Ryan Philippe, who was married to Reese Witherspoon, so at least Bieber is only four degrees from Reese, who is super cute. On “Somebody to Love” Bieber threatens to “write you a symphony” and even use violins. If he did this it would be the first time Bieber wrote a song. Next up is “Stuck in the Moment”, which is appropriately titled because you will undoubtedly always remember the moment you got stuck listening to this gorgeous tune. When Bieber hits the falsetto here he channels his inner Charlotte Church. On “U Smile” Bieber begins yet another song by belting a sensitive “ooooh yeeaaaah” over otherwise pleasant music. The layered vocals add another touch here, giving a high voiced Beiber on top of a higher voiced Bieber for your listening pleasure.

Bieber takes a surprising turn on his next track. One track after lamenting letting his girl go, Bieber drops the hit “Never Let You Go”, proving that Justin is the kind of guy that makes mistakes, yet never makes the twice. “Overboard” features teen-pop sensation Jessica Jarrell, who, despite not having her own Wikipedia page, gets billed as being “featured” in the track title. Perhaps the most impressive part here is that Jessica’s voice is lower than Bieber’s, meaning that the male/female vocal balance is maintained. The song is not without it’s troubling parts though. “I can’t swim on my own”, Bieber sings, foreshadowing a troubling aquatic future. I also take issue with “Eenie Meenie”, since it portrays a girl negatively for picking guys based on the “eenie meenie miny moe” system, thereby giving everyone an equal chance. Poor Bieber might not like the competition—being that he’s gorgeous—but I assure you this reviewer prefers my odds with an eenie-meenie-miny-moe girl than hoping I get picked straight up against a hottie like Justin. The second to last track is “Up”, which is full of ambition. “We can make the sun shine in the moonlight”, Bieber croons, proving that Bieber is bigger than science. “I know it’s hard, but baby believe me”, he pleads. I believe you, Justin.

The final track on Bieber’s album is the ultra-sensitive “That Should Be Me”, which just makes me angry. Whoever broke this kid’s heart should be ashamed of herself. He saw you at the movies! He knows you don’t care! It’s heart-wrenching. Of course, as he ends the song with the refrain “never should have let you go”, it’s clear Bieber has learned nothing from track #6. Overall though, it’s another solid track on a brilliant album.