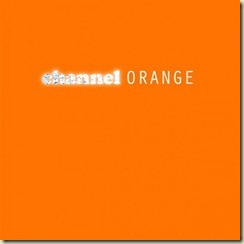 It’s hard to ignore reviews this good. Pitchfork--stingy Pitchfork—bestowed a 9.5 out of 10 rating on this album. Metacritic, the critic aggregator, shows a 93 out of 100 average rating across all critics. Nothing short of outstanding.

Frank Ocean has an intriguing backstory. In sum, he’s the crooner in a shock hip hop group, he recently came out of the closet on his tumblr, he’s written for Justin Bieber, and he gave away his debut album for free online after getting angry with his record company. Then he blew up online. That’s a lot for a guy only now releasing his first true studio full length. His debut album was the mixtape “Nostalgia, Ultra” was slotted at my #12 of the year last year on the strength of some absolutely drop dead amazing tracks. “Strawberry Swing”, “Swim Good”, “There Will Be Tears”, “Novacane”, and “Songs for Women” showcased a singer immensely talented and immensely interesting. “Strawberry Swing”, the Coldplay-borrowing track, was my #5 song of the year.

So you may notice that at the start of this review I dropped a fairly normal three and a half stars on this album. Three and half stars is good. Three and a half stars is not at all bad. Three and a half stars is not great. So what’s the deal? Channel Orange is emotive and interesting, and coalesces well as a whole. It’s good for night driving. It genre-shifts and even features a nearly 10 minute song. It’s an interesting album, no doubt. But it also lacks too many amazing tracks. One of the best of the bunch is opener “Thinkin Bout You”, with Ocean’s falsetto asking “Or do you not think so far ahead?/Because I’ve been thinking about forever”. Also very strong is the 9 minute, 53 second long “Pyramid”, a hazy storyteller and a crowning achievement for Ocean. “Pink Matter” and its distant guitar is also stellar, and when Ocean hits his high point mid-song, it’s the album’s best moment. “Lost” is funky in a good way, and “Bad Religion” is soul-bearing and moving.

The rest? Amongst the filler (five tracks are basically just spoken bits or quick bits of instrumentals, although “White” sounds pretty sweet) are tracks that have interesting sounds but don’t stand very well alone. “Pilot Jones” is one of the cooler sounding tracks, but it doesn’t go anywhere. Songs like “Sweet Life” and “Sierra Leone” contribute to the overall mood, but don’t warrant too many repeat listens.

(As an aside, curiously “Super Rich Kids”, good in it’s own right, has a piano progression eerily similar to Elton John’s “Bennie and the Jets”. I did a Google search just now and found out I’m not crazy. It really does. I guess it’s intentional? Never mind.)

Expectations can be a funny thing. I’ve written about them before. Frank Ocean’s “Channel Orange” is a strong, good album that warrants attention. Maybe I’m alone though, but I don’t see enough strength in the tracks to warrant the absolute monster amount of praise heaped on it. Don’t read that as a criticism though. The album is good, and songs like “Thinkin Bout You”, “Pink Matter”, “Bad Religion”, and “Pyramids” should be heard. But I can’t help but think that the four strongest tracks don’t even stand up next to the four strongest tracks from the “Nostalgia, Ultra” mixtape. But that’s more a critique of the critics than of the album itself, and “Channel Orange” is a great album to accompany you solo on an evening drive.