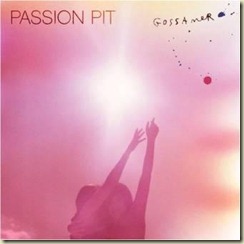 Passion Pit’s 2010 “Manners” was one of those albums that just about everyone liked. You had the rousing “Moth’s Wings” and the infectious “Sleepyhead”. It was fun to listen to; poppy and catchy but thoroughly unique. The downside of “Manners” was its inconsistency. For every winner there was a loser, and my play counts tell the story of an album with songs warranting three years of repeated plays and songs essentially ignored. But here in 2012 Passion Pit reemerges with “Gossamer”, an album full of stellar tracks at a wonderfully consistent level. Frankly, there really isn’t a bad song here, and kudos to Michael Angelakos for this stunning album.

There’s a lot to this album, though. Behind the surface of sunshiny melodies and soaring vocals is a heavy lyrical content, and this combined with the cancelling of Passion Pit shows due to Angelakos’ mental state show that there is an abundance of heavy depth to the tracks. A lyric like “I’m so self-loathing that it’s time for me to see” or “my pain is wasting and I feel like I’ll explode” is normally better reserved for your local emo band. Angelakos wraps these lyrics up in a different kind of package though, whether that be the declaration that “I’ll be alright” or using a chorus of group vocals to state in a unified voice “we all have problems”, which turns out to sound more reassuring than anything.

Some of the best songs showcase Passion Pit’s incredible talent for a hook. On album opener “Take a Walk” Passion Pit present a foot stomping, swarming song wrapped around the story of an immigrant. It’s one of the years best. “Love is Greed” might show Passion Pit’s ability to develop a hook the best, with a chorus designed to be sung along too and stick with you for the rest of the day. “Constant Conversations” is mind-blowingly catchy as well, sounding unlike any other Passion Pit song previously, and in a good way. “Where We Belong” is the most over-the-top song, taking a page practically from Sigur Ros by the end.

All this still neglects to mention “Cry Like a Ghost”, “Hideaway”, “On My Way”, and “It’s Not My Fault, I’m Happy” or any other great song here. The fact is that “Gossamer” as an album is a triumph for Angelakos and I wish his mental state the best. It’s among the year’s best albums and it’s an album worth owning.