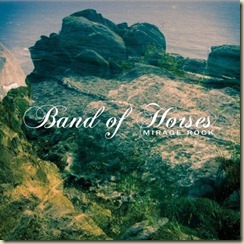 Always important to frame the context: Band of Horses are undoubtedly one of my very favorite bands in the world. Just the other night How I Met Your Mother used their song “Funeral” during a crucial emotional scene, and it struck a chord in me. Their sophomore album is as elite as elite gets. During one streak in the first half of the album they have three straight five star songs. I only have 83 five star songs in a collection of 11,448 songs. Their third album was amazing as well. So when I describe the fourth Band of Horses album as being almost saddeningly disappointing, both you and I need to be aware of what I hoped this album would be. This is an album where I have the release date written on a post-it note, where I buy it the second it’s available for download, and where I take a trip to Starbucks just to listen. And it’s done by a band that I’ve taken a picture with. I even own a shirt.

This is why rating this album is so hard. Am I being overly judgmental? Because yes, there are some great songs here. “Slow Cruel Hands of Time”, a wistful, nostalgic journey, would be stellar on any album. “Heartbreak on the 101”, featuring some lower register vocals from lead singer Ben Bridwell, emerges and soars. “Shut-in Tourist” is moving and introspective, if not self-damning, allowing self-pity and depression to overwhelm to the point where a foreign visitor won’t even leave the room. “Long Vows” and the sensitive steel guitar are about as country as BoH has gotten over the years, channeling some of the best of My Morning Jacket’s softest work.

But is that it? That’s just four songs. What remains, unfortunately, sputters between average and even two one-star songs, unprecedented by Band of Horses. It’s hard to imagine not skipping “Electric Music” or “A Little Biblical”. “Dumpster World” is mostly confusing, starting lounge-y and soft, but then genre-shifting to an unpleasant and noisy second half. The song, to it’s credit, is memorable even if not great. The same can’t be said for “How to Live”, “Knock Knock”, and the others. These are forgettable.

When my year-end list comes out, I’m certain it will contain some Band of Horses songs. Listen to the two below and you’ll have spent some quality time. But for the first time in their whole career I can’t find myself urging you to go out and spend money on the whole album. And that makes me literally sad.