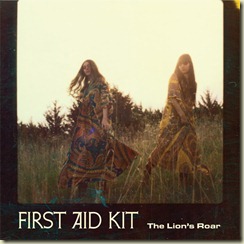 I can’t think of more different band to follow Muse and The Killers in these reviews. First Aid Kit are a sister duo from Sweden playing their own brand of indie folk and grasping the feeling of Americana better than many Americans can dream of. They made it big on the internet a few years back for their outstanding cover of Fleet Foxes, the Northwest’s premiere woodsy folk band. Now they have the distinction of being a recent surprise addition to my year’s favorite album list.

The album starts strong with the driving “The Lion’s Roar”, showcasing harmonies and a knack for instrumentation beyond simple folk. Then comes the album’s darling, and my personal reason for digging into the album as a whole: “Emmylou”. I’d say don’t ask me to explain it, but this is a blog, so I’m obligated to attempt. Featuring steel guitar, an irresistible melody, perfect harmonies, and the most sentimental pack of lyrics you’ve ever heard, “Emmylou” strikes at the core. Here’s a song that takes all the best elements of country and Americana and wraps it in a perfect package, and it comes from a pair of girls from Scandinavia. It’s amazing really. Two songs into the album, and it’s two of the year’s best.

The rest of the album stands well on its own as well. “In the Hearts of Men” has a throwback 70’s style and verges on syrupy sweet, but the girls keep it from going to far. Songs like “To a Poet” are especially moving and display the girls’ vocal ranges. Influences from bands like Fleet Foxes are especially present songs like this one.

To be frank, this won’t be an album for everyone. This is for fans of indie folk bands like Fleet Foxes or even Of Monsters and Men. Maybe Mumford & Sons to a degree. But if that’s your style then there’s not much to dislike here. My only complaint, since it’s in the video below, is why in the world a beautiful song like “Emmylou” with lyrics like “Well the bitter winds are coming, and I’m already missing the summer, Stockholm’s cold, but I’ve been told I was born to endure this kind of weather” would make their video set in the desert of Joshua Tree National Park? Makes no sense to me. Amazing song though.