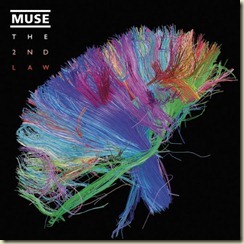 Muse’s fifth album ends with the most unpredictable sequence of Muse  songs ever created, and for an over-the-top band like Muse, this is probably a good thing. Muse, which has seemingly always thrived on being huge and towing the line between brilliant and ridiculous, return with an album that contains, amongst other things: dubstep, Russian choir chants, psychedelic guitars, two songs by the bassist, two songs featuring apocalyptic news audio, and a four song sequence in which Matthew Bellamy’s only appearance is his trademark wail. And that doesn’t even count the Olympic theme song.

It’s starts about as Muse as Muse can be: “Supremacy” is full force energy, blending rock, symphonic strings, and Broadway bravado. Rising out of snare drum percussion Bellamy draws out the word “faaaaantasy” straight out of Phantom of the Opera before the song goes full on prog rock. It’s a genius first song and would have been great on any Muse album throughout their illustrious yet downward trending career. The second song, “Madness”, is nothing at all like “Supremacy”, instead softly churning over an electro groove until Bellamy breaks forward with an impassioned “I need your love!!!” as the song grows. “Panic Station”, although inferior to the opening two tracks, still packs a pretty good dance-ish punch over a sick bass line.

And then comes “Prelude”. This is Muse. Of course there’s a prelude. And naturally it’s the fourth song and not the first. Whether you care about it or not will strictly depend on whether or not you have always fancied the symphonic elements of Muse (I have). But you sure can’t miss what it leads into: the just absurd, ridiculous, “is it so absurd and ridiculous that I like it?” song “Survival”, known best for being the Olympic theme song. This is the song that features Russian men’s choir chanting and Bellamy declaring “It’s a race!! And I’m gonna win!!!”. It toes a fine line between stupid and awesome, but the wry smile on my face as I listen to it has me leaning towards liking.

The more “normal” sequence of the album comprises the next four tracks, with “Follow Me” being the most forgettable of the bunch. “Animals” gives ammunition to the Muse-are-just-subpar-Radiohead-copycats crowd, but it’s hard not to enjoy the song sonically, with some fantastic psychedelic guitar work tepidly stringing through the song. It’s some of the best guitar from Muse in my memory. It makes me forgive the noise at the end. Then comes “Explorers” and “Big Freeze”, the two most typical Muse songs on the album.

Still, years of training did not prepare me for the final four song sequence batch of this album. It starts with a dreamy number, “Save Me”, voiced by Chris Wolstenholme, the band’s longtime bassist. Perhaps surprisingly, the song is outstanding, and benefits from some great guitar work as well, particularly near the end. Genre-wise, it’s probably closer to something you’ll get when a mainstream rock band like Breaking Benjamin goes “soft”. Again surprisingly, this is not the last song fronted by Wolstenholme, who also helms the lesser “Liquid State”. The last two songs are then essentially instrumentals, but with their own touch. It starts with “The 2nd Law: Unsustainable”, the internet-famous Muse-does-dubstep track. It’s hard to deny the song’s power, and I’ve pushed my car’s volume with it already. It features Bellamy’s only appearance in the last four tracks, when he is heard wailing over the song’s crescendo. The final track, then, is “The 2nd Law: Isolated System”, a more classic Muse symphonic effort, mixing elements of ambient music, news reports, and strings into a capable closer to an odd album.

So how do you rate an album like this? Purely on individual song ratings the album actually doesn’t stack up that well to other Muse albums, but it’s hard to ignore that the album is abundantly interesting and entertaining as a coalescent whole, and that’s the album’s real strength. From the first note of “Supremacy” to the final note of “The 2nd Law: Isolated System”, it’s difficult to stop listening, and that’s a major plus.