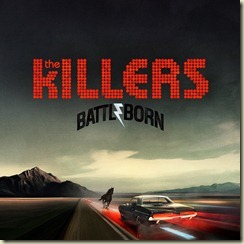 I wrestled with this album, much like I’ve wrestled with every Killers album since Hot Fuss. You see, I, like maybe you, and many many other people consider Hot Fuss to be an album of greatness. Alternative rock near its best. A collection of masterpieces of synth-driven rock. There was “Somebody Told Me”. And “Mr. Brightside”. Oh, and “Jenny Was a Friend of Mine”, “Smile Like You Mean It”, and “On Top”. Same band! Same album! And a debut album!

Then came Sam’s Town, an album I probably underrated at the time. The album was Springsteen-y and different. Still good, but not as good. And then Day & Age, a slicker, easy-on-the-guitar album, clearly inferior to anything Brandon Flowers and company had ever done. Brandon Flowers then branched out on his own with Flamingo. And it’s actually Flamingo where you’ll find the most similarity to “Battle Born”, with the Vegas-influenced glitz and glamour meeting synth rock.

So what to make of this album? Well, it’s probably about time to give up hope that Hot Fuss Part 2 is ever coming. So instead I’m interested in judging Battle Born on its own merits, and in that sense it’s actually pretty good. Better than Day & Age by a good margin, and maybe a step below Sam’s Town. The Springsteen vibe is still present, especially on songs like “Runaways”, where the characters and storytelling will strike a chord with some. Songs like “The Way it Is” bring Vegas and Nevada to the frontlines, with mentions of Esmerelda County and Elvis. But when the chorus breaks in it’s a top tier Killers song. “Here With Me”, straight out of another decade, is the kind of song you could have never seen Flowers write in the “Somebody Told Me” days, but its chalk full of heart and sincerity. “A Matter of Time” might actually be the closest thing to old school Killers. On this song Flowers’ voice revert a little closer to the grittier style of the early album. It’s a welcome throwback.

A few more interesting tracks spring up as well. “Deadlines and Commitments”, while definitely leaning more on Flowers’ individual style, has a distinctive chorus and catchy melody. “Miss Atomic Bomb” has been presented as a sequel of sorts to “Mr. Brightside”. Lyrically, Killers fan will notice that “Mr. Brightside” himself actually makes an appearance in the song: in Mr. Brightside the protagonist sings “Open up my eager eyes, ‘cause I’m Mr. Brightside”, while in “Miss Atomic Bomb” he sings “I was new in town, the boy with the eager eyes”. It’s a clever touch by Flowers, presenting dedicated fans with a link to the past.

The weakness of the album is the second act. Songs like “The Rising Tide”, “Heart of a Girl”, and “From Here on Out” never take off. Only “Be Still”, a softer song with the uplifting line “don’t break, character” bolstering the chorus is the back end’s only highlight. Still though, this album ends up being pleasantly surprising given the career trajectory of The Killers, once a top favorite band in college and now relegated to “pretty okay” status. This is not an earth-shattering album, but there’s plenty here to enjoy, especially from the likes of “The Way it Was” and “A Matter of Time”.