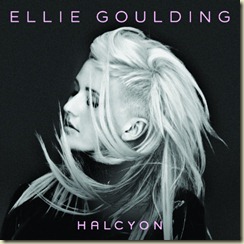 I wish I could have a conversation over coffee with Ellie Goulding just to ask her about how she fits into the genres of world. Here is an artist that has seen her song “Lights” reach #2 in the US and has recently opened for Katy Perry, not exactly the recipe for hipster cred. Yet somehow she manages to find a foothold of popularity with people who are probably a whole lot closer to liking Cat Power and Joanna Newson than they are to liking Katy Perry or Demi Lovato. Her choice of internet covers? Active Child and The Weeknd of all bands. I reviewed Ellie Goulding’s debut album earlier this year, my review coming about as late as Ellie’s US popularity. I gave her three stars and a thumbs up.

So now Ellie releases the perfectly-timed “Halycon”. I guess the major benefit of an album taking a couple years to catch on is having new material ready the instant your fans are hungry for more. And the good news? Ellie seems determined not be categorized, and “Halycon” is actually a better album than “Lights”. Make no mistake: Ellie Goulding is primarily a pop artist making pop songs for pop radio. However, give it a chance ye naysayers, and you too may fall in love. Album opener “Don’t Say a Word” rises slowly out of echo chamber vocals and soft electronics to suddenly break forth, displaying Goulding’s vocal abilities over sleek production values. The song is hardly poppy at all. “My Blood”, the album’s best track, displays Goulding’s skills the best. A bursting chorus, a catchy hook, but never so syrupy sweet or predictable enough to get lumped in with her contemporaries. Songs like electronically-influenced “Anything Could Happen”, and “Only You” seem closer to Passion Pit, and if you prefer your indie influences to be more than just inferred there’s also the cover of Active Child’s “Hanging On”. Active Child? Really? A cynic would say it’s a desperate pander to blogosphere, except she executes it so well.

There’s also the emotional touch on “Explosions”, full of string and piano and ready for a crucial scene in a TV drama. Yet something about Goulding’s voice keeps it from crossing a line. “Atlantis” takes the Passion Pit element and mixes it with one part Enya. Album closer “Dead in the Water” is a dreamy closer, meandering close to nowhere while remaining beautiful, a fitting finale to a surprising album.

I’m not crowning Ellie Goulding. Three and a half stars is appropriate. But boy if you are one of my readers who is more accepting of radio pop music, I don’t know how you couldn’t enjoy Goulding’s creative take on it. I’ve come to accept that my version of Radiohead-Shins-Spoon-Bon Iver type music will never be radio-loved, but if Ellie Goulding can rule the pop charts then radio will be a better place.