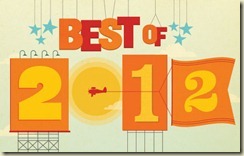 Pop rock met alternative rock when fun., fronted by former lead singer of The Format, Nate Ruess, burst into the Billboard charts. If you’d have told me that one day The Format’s remnants would land two top ten singles (including a #1 single) and six Grammy noms, I’d have thought you were crazy. But with rousing, catchy, undeniably loveable songs like “Some Nights”, success is warranted. This song is impossible to hate, emerging out of layered vocals and snare drum as a sort of call to arms.

Indie folkster James Vincent McMorrow first hit my ears with “We Don’t Eat” last year, and now he’s found himself on the Twilight soundtrack and in crucial scenes in one of the biggest grossing movies of the year. The success is warranted, as McMorrow’s breathy and naturally moving voice meets a dark and moody vibe, and becomes his best song to date. Perfect for Bon Iver fans.

My favorite part about having my own blog is I can pick whatever I want. That’s right, I have useless power!! Eve 6 was a high school and college favorite, but then they dropped off the map. I was one of the few who gave their new album a chance, and it wasn’t very good, save for tracks like “Pick Up the Pieces”. The protagonist of the track: a troublemaking male, loved only by his mother (“She thinks about you often/she has no idea you’re rotten”), trying to make good, struck me as a character strangely foreign to music these days. Eve 6 serves up with the classic softer touch, and it’s a gem.

Reviews may have been mixed on Santigold’s long-awaited second album, but there’s been no denying that “Disparate Youth” is a killer track. Melding styles like only Santigold can, “Disparate Youth” rolls over layers of synths and drums, creating a groove partly alt rock, partly R&B, and fully Santigold.

The folksters from Iceland get their outstanding album kicked off the right way with “Dirty Paws”. The song is very forward moving, and the breakout at 0:56 shows why this band made some waves in 2012.

Frank Ocean was featured heavily in 2011’s list, but 2012 was definitely Ocean’s breakout year. His universally acclaimed album Channel Orange hit the big time. Ocean causes some divergent opinions for sure, but it’s hard not to be impressed with “Pyramids”, a truly unique alternative-meets-R&B track. “Pyramids” is 9:53 long, without filler. It features a John Mayer guitar solo, enough currency for the pop charts, and enough experimentalism to appease the massive indie following. It’s thoroughly unique and thoroughly wonderful.

A few months ago I bought the full Lower Dens album simply after hearing “Brains” for the first time. It was a hunch buy I consider worth it, but nothing on their album topped “Brains”. It practically builds from the first note. And it keeps building. “Brains” is a five minute long cathartic experience.

Sometimes it’s hard to place a song that’s currently the flavor of the week into a list, but I’ll slip it right into the middle. Moonface’s dark aura is perpetuated throughout their entire album, but it’s on “Quickfire I Tried”, when the light piano breaks through, that they hit their pinnacle.

“Supremacy” gets Muse’s new album kicked off right, rising from operatic vocal drama and strings into a sweeping middle and a hard-hitting conclusion. It’s vintage Muse, all snare drum and guitar solo and Broadway and horns and rock, and will please fans both new and old.

I fell in love with Royal Teeth in all of about one listen. The song has a wonderful summer quality, and will have you singing along in no time. Sometime it doesn’t hurt to stop being experimental for a second and just be fun, and this song does it right.

The first of two entries from Grizzly Bear’s Best of the Year album “Shields” is “A Simple Answer”, a forward moving and meticulously developed track that sounds simple enough at the onset. Listen closely though, because so much more going on here than first meets the ear.

Passion Pit is at home when their music is soaring, but one of their most moving and surprising pieces of music on their heartbreaking album is “Constant Conversations”. The song plays with a beat like a slow jam, and the lyrics are like an apology. “I never want to hurt you baby/I’m just a mess with a name and a price/and I’m drunker now than before they told me drinking doesn’t make me nice”.

We didn’t get any new Spoon this year, but Britt Daniel, the frontman for independent music’s most consistent band, still finds his way into 2012 by co-fronting Divine Fits with Wolf Parade’s Dan Boeckner. The best track is the very Spoon-ish “Flaggin’ a Ride”, riding trademark percussion and guitar into one of the year’s best jams.

Out of left field comes this one, first witnessed on MTV’s Unplugged. Young the Giant are one of the best things going in alternative rock right now, and although I missed out on getting them onto the 2011 list, they make their way onto 2012’s with a brilliant cover of this Gorillaz song. Stick around for the breakdown. It builds until the middle, and around 2:30 breaks into one of the best portions of any song all year long. It’s a must listen, even if you can’t buy it. (This song is not on the Spotify list because it’s not available)