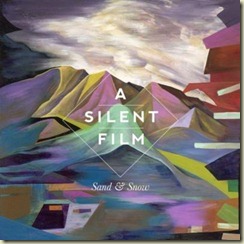 English alternative rock band A Silent Film are a bit of a cautionary recommendation. The other UK bands they are probably the most easily compared to: Keane, an amped up Coldplay, Snow Patrol, etc. might elicit any kinds of reactions, positive or negative. The Past and the Pending has always been friendlier to these bands than the blogosphere, but the problem is that A Silent Film doesn’t embody any of their best qualities, instead only ripping off the portions that are the least desirable. More on this in a minute.

A Silent Film know how to do one thing very well, and that’s construct a hook, which is crucial in making ear-friendly alternative rock. This means at their best, on tracks like “Harbour Lights” and “Danny, Dakota, & the Wishing Well”, we get instantly gratifying alt rock. However, A Silent Film are purely wretched lyricists, singing either in generalities or syrupy stupidity. It’s a shame, because there’s probably a Killers-ish ceiling for these guys, but they never really get close.

The best display of the colliding talents and lack of talents is right up front on “Reaching the Potential”. The lyrics—oh the lyrics—are like sickening amateur late-U2 pretentiousness. It’s all about getting our bellies full and animals in cages and how we aren’t reaching our potential as humanity, but it’s said in such cheesy ways that you will be more moved to eye-rolls than you are to action. Interestingly though, as the song moves on it becomes clear that musically the song is fantastic and forward moving, full of all strings and oh-ohs and soaring alt rock. “Love Takes a Wrecking Ball” has a similar issue. There’s a good band in here somewhere.

The band’s potential is fully on display with “Danny, Dakota, & the Wishing Well”, a raucous track backed by a great string line. “Anastasia” is good as well, even if it’s beginning portion is troublingly similar to Coldplay’s “Viva La Vida”.

And that brings me full circle. I have long defended Coldplay because of way I think they deftly toe the line between pop and experimentalism. With Snow Patrol I look beyond their rom-com highlights to see the band they are the other 90% of the time. And with Keane I loved their purely keyboard-based early days. A Silent Film may be comparable to these bands, but the only things they borrowed from Coldplay, Snow Patrol, and Keane are the schmaltzy parts. In other words, A Silent Film plays to the Coldplay “Fix You” and Snow Patrol “Chasing Cars” scene a whole lot more than it does to the “Death and All His Friends” and “The Golden Floor” respectively. Except unlike those bands, the schmaltzy part isn’t a side of the band, it’s the whole dang band.

I’m not here to tell you what to like, just to help you find it, so go ahead and give these faves a try and expand from there, and if you don’t put a strong weight on lyrics, then you might enjoy.