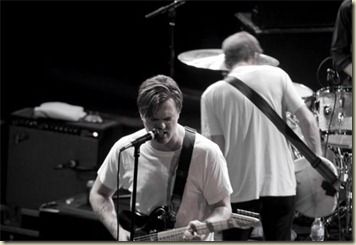 Normally I don’t post about individual songs, but this one got me really excited. Cold War Kids, who crafted one of the best modern albums with “Robbers & Cowards” and then followed it up with the very good “Loyalty to Loyalty”, are back with a new song from a new album. Why is this news? Because after their perfectly great sophomore album, the band stylistically changed it up on their third album “Mine Is Yours”. The album wasn’t BAD (it still contained some very good tracks), but after hiring the production team of Kings of Leon they released an album that stylistically abandoned much of what made Cold War Kids not just great, but unique. Again, the album wasn’t bad, but it felt like a little piece of Cold War Kids died in the production.

Now with their fourth album due, “Miracle Mile” has been released ahead of time, and the sneak peak gives some great hope that album #4 will bring the Cold War Kids I fell in love with back to us.

Holding down a full-time job and writing a massive year-end post and making sure your wife still knows you care is hard enough sometimes, so I definitely fell behind on regular albums lately while I spent a month putting together the Best of 2012. Here’s hoping this catches you up, and satisfies the more rapid reader anyhow! 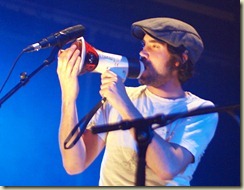 The xx almost always depend on the mood, and those seeking the nighttime stripped-down sounds won’t be disappointed. It doesn’t get a lot of play time from me and I prefer their debut album, but songs like “Angels” and “Try” are outstanding.

I avoided a full review of Babel mostly because I knew I didn’t like it much, and many people I know do. Feel free to keep liking it, as there are definitely some good tracks here like “Lover of the Light” and “I Will Wait”. Unfortunately it’s an often repetitive album that adds nothing to their debut while getting simultaneously less interesting. My guess is that in two years, if not already, most Mumford fans will be listening to their first album, not this one, when they’re in the mood.

After the brilliant early single “The Base”, I got very excited about the Interpol frontman’s solo effort. Unfortunately this mostly disappointed. There’s a couple others worth hearing, such as “Over the Shoulder”, but there’s also some bizarre oddities and clear missteps.

Indie poppers Freelance Whales won me over with their debut, and as an entire album Dilluvia may be even better. The sound is more creative and rich (see “Aeolous”), and the decision to let Doris Cellar take on some vocals on tracks like “Winter Seeds” was brilliant and brings some great diversity to the album.

I’m not saying the album is anything special or unique, but if you’re a long-time fan of Rob Thomas’ work, there’s plenty to love here. On songs like “Sleeping at the Wheel”, “I Will”, “Overyjoyed”, and “Parade”, Rob keeps Matchbox Twenty as good as they’ve ever been.

If you’re going to love the relaxing, orchestral indie folk of Patrick Watson, you’ll know right away with “Lighthouse”, truly one of the most beautiful songs I’ve ever heard. It doesn’t stop there, and Watson lends his talent and breathy vocals to a stunning album.

In case you missed it, Sufjan Stevens released a massive nearly-60 song Christmas album this past year. Even as a Sufjan fan it was a lot to sift through, and a good portion were, let’s face it, a little weird. Fun weird, sure, but very weird. We’re talking old church hymns and such. But as with everything Sufjan touches, some of it can’t help being amazing, which is how “Justice Delivers It’s Death” was one of my top 5 songs of the year and “Christmas Unicorn” turned into a bit of a theme this Christmas.

Amarante was my left field pick this year after I stumbled upon them. Even finding them on Youtube was hard. But like another favorite of mine, Mimicking Birds, Amarante brings a change of pace to indie folk, adding a touch of creativity to what already sounds gorgeous.

It took me a second to adjust to the dark, grim sound of Moonface, which sounded like a dramatic Interpol. But when the small piano broke into the middle of “Quickfire, I Tried”, I was hooked. Worth checking out.

Beach House was a critical darling in 2012, and for good reasons. Although I didn’t fall head over heals for it, there’s clearly plenty to love. “Myth”, “Wild”, and “Lazuli” are all stellar, though I thought the album didn’t lend itself well to many repeated listens.

I resisted Purity Ring a lot at first. This is probably because stylistically, the who bedroom electronica thing is just not my cup of tea. But after many trustworthy sources kept recommending it I persisted, and now I’m a small convert. “Odebear” on headphones? Yes, please.

If you’re a fan of the White Stripes, you’ll definitely love Jack White’s solo effort, featuring some amazing songs like “Love Interruption” and “Sixteen Saltines”. It lacked something in the way of overall cohesiveness, but it’s a fun ride.

Am I the only mostly-indie blogger who blogs about Lifehouse? Maybe! I’ve always had a soft spot for Lifehouse and their work that has for a long time existed in the shadow of their more generic radio hits. On the strength of songs like “Only You’re the One”, the album is their best work in years and welcomes them back into the fold after their previous misstep.