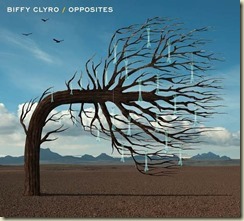 If you don’t know Scottish alternative rock band Biffy Clyro because of the song “Many of Horror”, then go ahead and familiarize yourself now and thank me later. It was a top 10 song in the UK back in 2010, and it’s one of the best songs of the last five years.

Without getting absurdly deep into this album, I’ll let you know that I own the double edition album with 20 tracks, which I consider bloated and unnecessary. I’d be more apt to pass this off as the result of owning the double and not the 14 track single, but I checked out what six tracks didn’t make the cut, and it’s definitely still bloated. I don’t completely understand why Biffy Clyro decided to make this album so long, because a great normal sized album could have worked here. The band is the master of the soaring modern rock song, and there is no better example than the string-laden, woah-oh heavy “Biblical”. “Biblical” serves as the backend to a strong first half, with features softies “Opposites” and “Black Chandelier”, as well as the more rock-centric “Sounds Like Balloons” and “The Girl and His Cat”.

Biffy Clyro sometimes seems like they are playing to two different audiences, piecing together sweeping songs in the vein of Snow Patrol, then player grittier rock numbers. They actually shift back and forth fairly admirably, though it’s my opinion that the band has some real chops when it comes to soaring numbers. The ending to “The Thaw”, the electronic “Skylight”, the bridge on “Accident Without Emergency” show a real talent for the kind of songs that light up live audiences. The heavier songs are generally more forgettable in the long term, unfortunately, despite the kind-of-awesome bagpipes on “Stingin’ Belle”.

This is one of those albums where most people would be better off buying a couple singles. But your iTunes would most definitely be improved with the additions of songs like “Biblical”, “Opposites”, and “Skylight”. Biffy Clyro may not make the best overall, coalescent albums, but they sure know how to make a really good song.