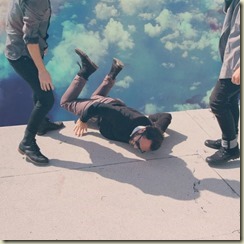 I have such fond memories of 2010 musically. In a short period of time I was introduced to William Fitzsimmons, Mumford & Sons, The Antlers, The xx, Broken Bells, and Yeasayer. New music from The National, The Hold Steady, Minus the Bear, Band of Horses and other established favorites dominated my commutes to work at Mountain Home Air Force Base. Three years later I listen to all those albums a lot still, but one of the most timeless releases was by a sunshine-y California band, Local Natives. Their debut album, Gorilla Manor, had everything. It was peppy, loveable, interesting. It struck a perfect balance between indie and pop. I had the opportunity to see them live right in the height of my love for them, and they did not disappoint. “These guys will be huge” I said to myself and my wife. In the indie world they did have a good year, that’s for certain. But it wasn’t until the recent release of Hummingbird that a three year stint of no music was broken. In today’s internet-driven, low-attention-span music world, three years is forever.

It’s no stretch to say that a three year break makes anticipation all the more real. I have been looking forward to this album from the minute I got wind of it. Anticipation can kill an album, because it raises expectations. I’m happy to report that Hummingbird meets and exceeds those expectation and, if my ratings are correct, Local Natives still hasn’t written a bad song.

On Hummingbird, Local Natives establish a heavier side. Not a darker side necessarily, but a more thematically mature side. The almost Beach Boys, California coast inspired mood that permeated songs like “Sun Hands” a few years ago is still present, but instead, on songs like “Heavy Feet” we find them “left in the sun, shivering”. On opener “You & I” they ask “when did your love grow cold?”. The excellent percussion that served as the background to their debut is still there as well, best showcased on the lush “Wooly Mammoth”.

Hummingbird is excellent because it does not compromise on sound, but it sticks with you because it adds more heart and depth to what Gorilla Manor had. The two best examples of this come on the back end of the album with “Mt Washington” and “Colombia”, the two most moving songs in their collection to date. “Mt Washington” builds and builds, which is amazing considering it’s barely over 3 minutes long. A simple refrain like “I don’t have to see you right now”, sung repeatedly and sung in the way it’s sung, cuts deep. The fact that it leads right into “Colombia”, a memorial song about the loss of one of the ban member’s mothers, makes the punch the album packs even stronger. “Every night I ask myself: ‘am I doing enough’?” they ask on “Colombia” with all the sincerity in the world.

Here’s the best way I can put this. My favorite song on Gorilla Manor was “World News”, and my favorite line was playful and simple. “The lane next over is always faster, and you wait so long until you’re so bothered”, they sung. “But right after you complete your merge, the lane you started in gets going. And while you wait for your luck to change, all you can think of is where you started.” It was ingenious in its only way, and the song teaches a lesson of perspective in a fun manner. On Hummingbird the craftiness of the songs are just as strong, but the problems are more serious. On “Bowery” there’s a moment where Local Natives almost remember Gorilla Manor when they sing “I remember sunrises without sleep” over a dramatic, repetitive, and urgent piano. Hummingbird is not as fun as Gorilla Manor, but it’s deeper and perhaps, ultimately, it’s better. Or maybe Local Natives have just made two consecutive near-perfect albums to start their career.