EuroBlog! The Last One: From Scotland to the Moors, and Passing Judgment on Foreign Lands

As far as blogs and the United Kingdom go, this one will stretch about as far as possible: from Scotland up in the Northeast all the way down to Dartmoor National Park far in the Southwest. We awoke on Wednesday in the town of Edinburgh, Scotland, which is about as foreign a feeling town as I think we saw. When you travel around the United Kingdom and even Canada there’s a sense that things are different, but there are also so many similarities, perhaps mostly due to such a common heritage. Not so in the dark city of Edinburgh. 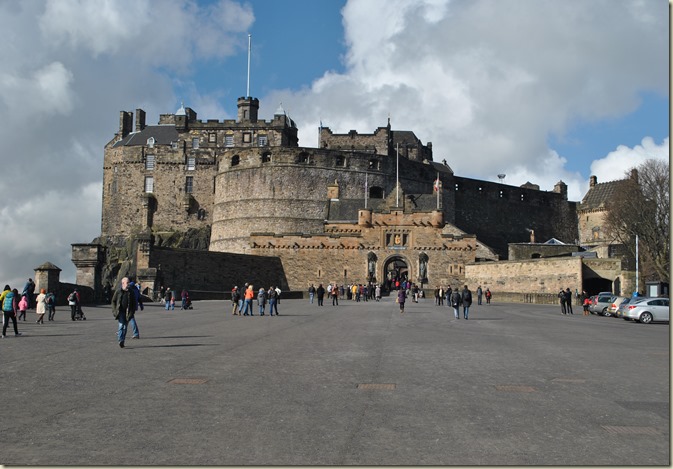 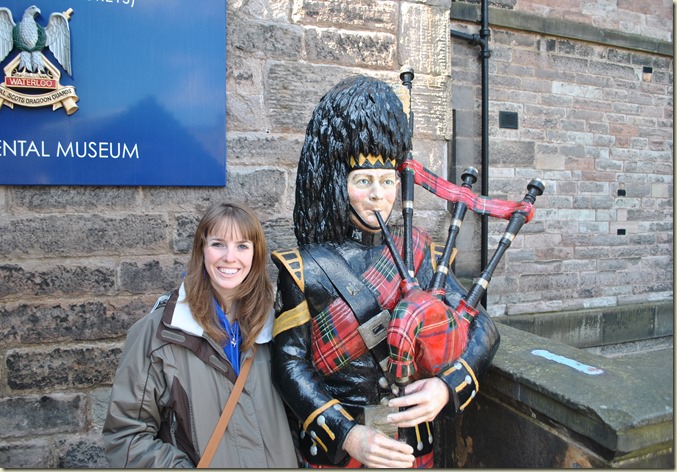 Due to the lengthy drive that awaited myself, Holly, and Meleah, this was our only destination on Wednesday before we readied for the very lengthy north-to-south drive from Edinburgh back to the West Row. But we had to have some fun with it, right? Meleah rightly detoured us off the quickest path and to a path that left us in pursuit of Hadrian’s Wall. But first we had a little fun at the England/Scotland border, representing some of their shared history of warfare and rivalry. Holly represents Scotland with her festive scarf, and I similarly represent England with my own festive scarf: 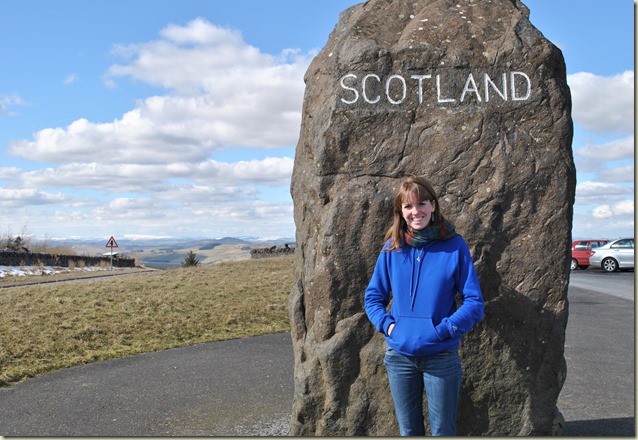 We also sought Hadrian’s Wall, the one-time border between England and Scotland. Seeing that we had to drive considerably past the border in the pics above, I guess congrats to Scotland for usurping more land! Using just an atlas and road signs, we found this humble portion in the middle of nowhere. But it was OUR portion. Here' is me planking, because I am the only one of us tall enough to be in both countries’ former territories at the same time. 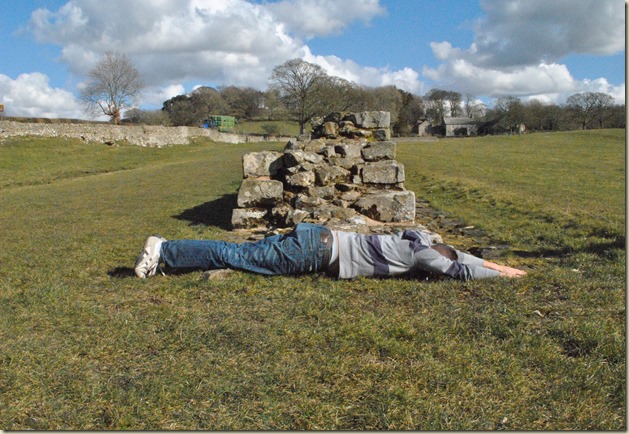 Always ones for togetherness, the England and Scotland sides beckon to each other. 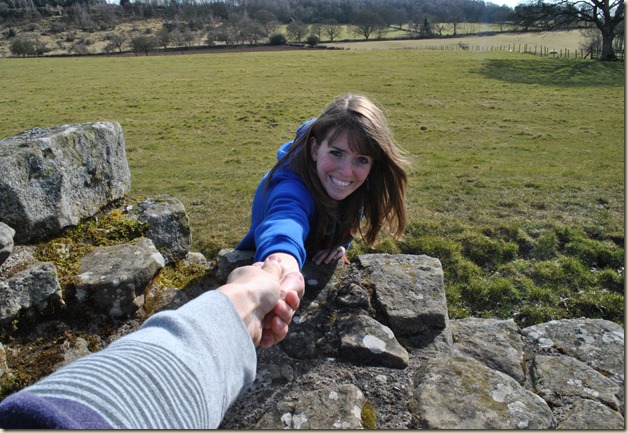 The next morning we unfortunately had to separate from Meleah, as she headed to view the tulips in Holland. We hopped in a rental car and headed off for one last adventure.

Our destination was the Cotswolds and then the unique city of Bath. The Cotswolds are the kind of charming place you often see in the movies, all adorable cottages and small little towns. 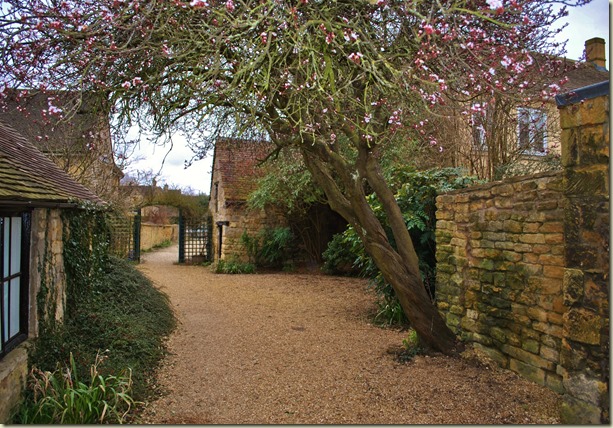 We walked into the quietest tea shop in the region too. And I mean eerily quiet. The place was nearly full, but Holly spotted a table by the window so we took our seat. No one in the whole place was saying a word. Then the lady came out from the back and saw we’d taken a seat, then not-so-nicely asked if we could move to a smaller table. Having been place in a non-window seat by an impolite lady, we kindly moved right out the door and frequented a much nicer tea shop. I don’t know if maybe the owners of these two adjacent tea shops are friends and hang on the weekends, but I like to imagine they are bitter rivals, and I hope Tea Shop #2 vanquishes the other in tea battle with their nicer attitudes and delicious paninis.

On to Bath it was then! I didn’t know this but Bath was a major Roman site back in the days of the vast Roman Empire. This meant we got to see actual Roman artifacts and buildings, such as the (go figure), baths. 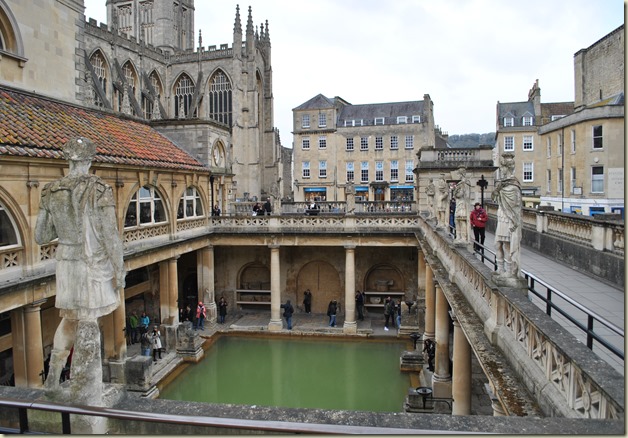 Bath is also the former home of Jane Austen, who I think is Holly’s favorite writer, and unless she leans over my shoulder to correct me, I’m just going to go with that. Anyhow, they have a whole dedicated museum where you can have “Tea With Mr. Darcy”. 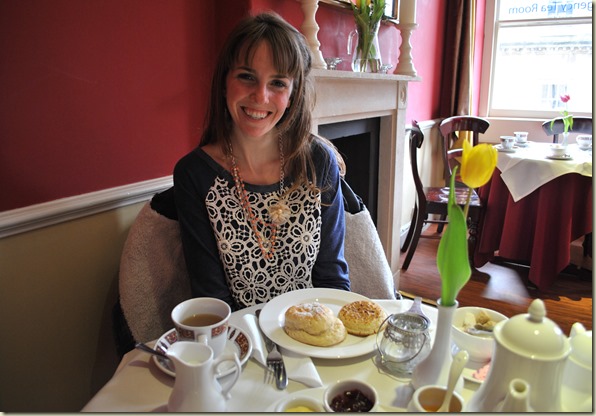 Tea might not be the manliest thing in the world, but I could eat scones with jam and clotted cream all day.

in an attempt to be a Good Husband, I also played along during the dress-up portion. Check out this attractive fellow: 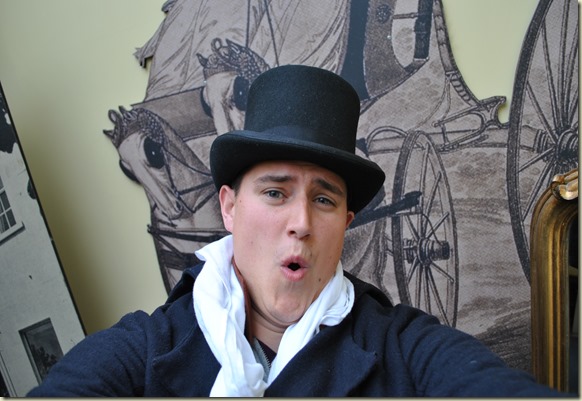 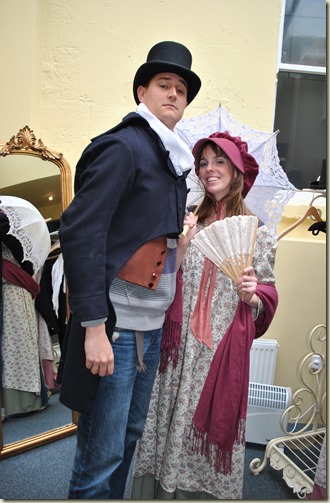 They take the Jane Austen thing quite seriously here too, marking the bathrooms like this: 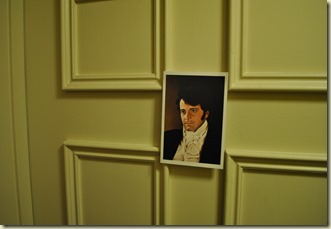 Fortunately I didn’t get in too much trouble when—while looking at the Jane Austen movies exhibit--I told the very-into-it fellow that “Finding Jane Austen” was a terrible film that sucked my life away (or something like that). Perhaps my compliments for the Alan Rickman/Hugh Grant “Sense & Sensibility” won me points. I also didn’t mind staring at Keira Knightley during “Pride & Prejudice”.

We ended the day at the Fern Cottage, an award winning B&B that serves a heavy breakfast and is run by two extremely nice people. I could have chatted with them all day. I also may send them this photo I snapped of the room, since it looks like it could be website worthy in my mind… 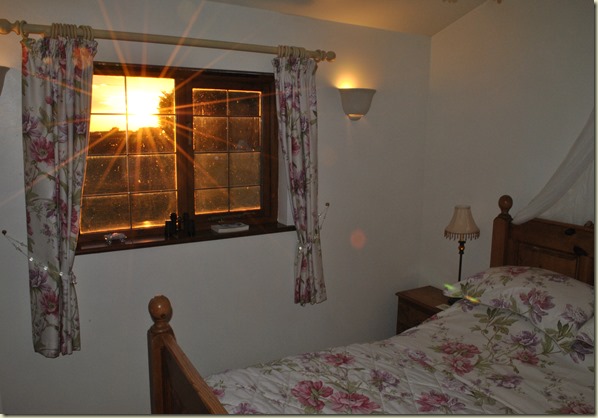 The next morning the destination was Dartmoor National Park, but what would a trip be without a spontaneous stopover in Wales??? With just the intention of crossing the bridge, we ended up taking a blind detour to the Wye Valley, where we found a hike we’d never researched, and set off onto a trail for no reason but to say we’d spent some time in Wales. We were treated with these views. 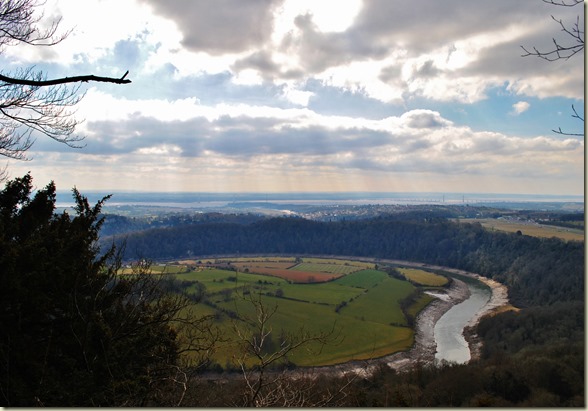 Then it was on to Dartmoor, an entirely Sherlock Holmes inspired portion of the trip. Holly handed me two of the strangest requests I’d ever heard: that we visit Grimspound and the Fox Tor Mire. The things is, neither of these two sites are particularly famous, even in the UK or even in the national park itself. It took some Googling, but somehow we found Grimspound, a secluded ancient rock circle an a road literally called “Unnamed Road” in the GPS and marked by nothing more than a sign that said “public path”. But apparently this pretty-cool site was where Watson holed up during a terrifying night in the Hound of the Baskervilles. 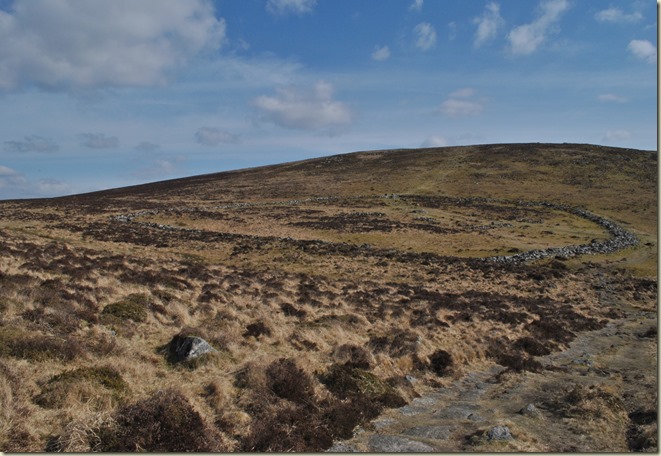 Naturally Holly holed up herself with the Hound of the Baskervilles case notes she’d bought at the Sherlock Holmes museum back in London. 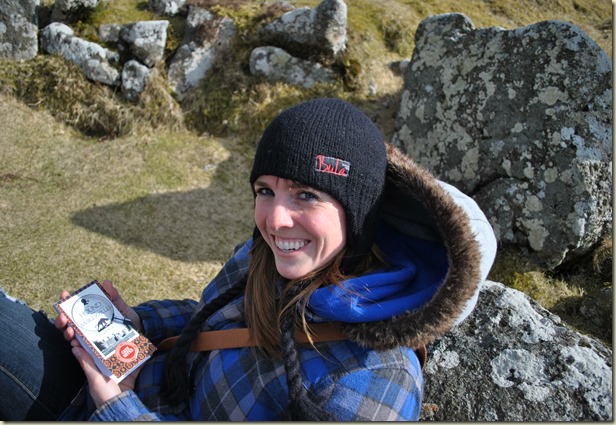 For my part, I enjoyed seeing the windswept peat bogs. It’s definitely a piece of landscape I’ve never experienced, and although this is not a common tourist destination, we fancy ourselves to be not-so-common tourists.

The Fox Tor Mire ended up being a little fun mostly for the visitor center, which seemed to having some Sherlock nerds ready and excited for Holly to come in asking about how to find the otherwise non-descript bog mentioned in the book. 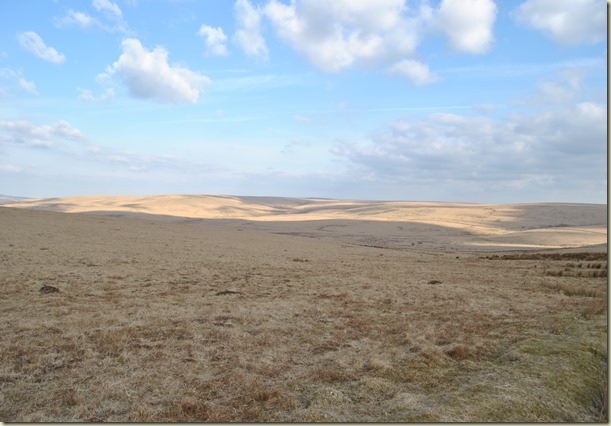 The last thing we did was wind over to WInchester and see the grave of Jane Austen (this also happens to be where Queen Mary Tudor was married and the sire of the 12th century Winchester Bible). Now I sit on a plane heading back to my home.

Before I go, I want to say thanks for reading. There were many more of you reading than I ever could have imagined. A couple thoughts before I bring this thing to conclusion. I’ll present them in bullet points because I’m American!

Finally, a special shout out to the people who made this trip as amazing as it was. Here’s to Julie at the Allman’s Heath Cottage, our carriage tour guide Shaun in Ireland, our Irish bartender, the girl who prepared our room while doubling as our waitress, the fellow at Travelodge who almost redeemed the awful city of Glossop, the worker at the castle on Loch Ness, Sue and Pete and the Fern Cottage, the Dartmoor visitor center nerds, and most of all our overall tour guide, Meleah. It was fun! 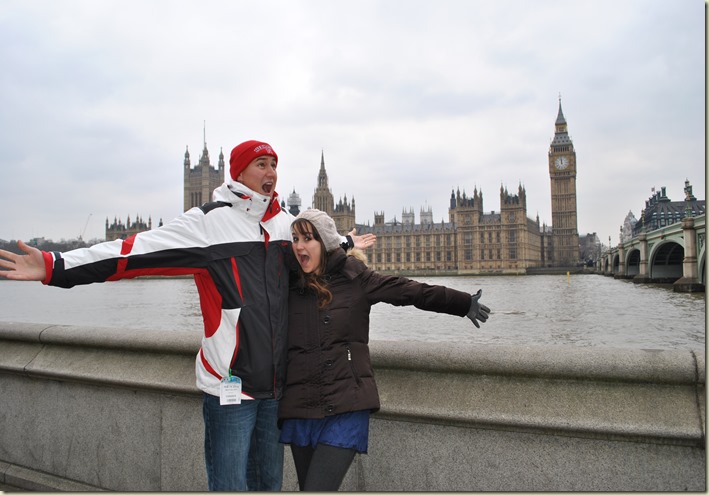