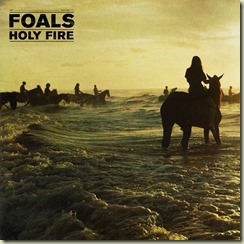 During my rundown of 2012’s best songs, I noted my annoyance at the purveyance of bedroom electronica as the vogue music style of the day. Many of the blog buzz bands and artists are following the lead of Purity Ring and Grimes (two who do it well), and it seems like finding solid indie rock right now is a little difficult. In other words, as I sit here in March of 2013, it’s not bands like The Strokes, Modest Mouse, or The Hold Steady getting all the attention. Of course, that hasn’t taken away my taste for something that has the independent spirit but still is driven by guitar and drums and not merely synths. Which brings me to “Prelude” and “Inhaler” by Foals, the first two tracks on Holy Fire. “Prelude” and it’s build up, and “Inhaler” with its release represent the opening two tracks I’ve been searching for. “And I can’t get enough…SPACE” is sung over driving guitars reminiscent of some of Muse’s best early work. I don’t know how the rest of the year will stack up, but “Inhaler” will certainly populate the upper regions of my list.

Foals’ knack for nailing the modern rock genre is also featured almost equally well on “Milk & Black Spiders”, a song that doesn’t even feel like it’s necessarily building, until it breaks out into a monumental swarm of guitar, synth, and strings. “Late Night” builds nearly as well, but rocks a bit more. The album’s strength is also bolstered by some softer and more melodic numbers, namely “Bad Habit”, “Out of the Woods”, and “Stepson”. There’s also the more radio-ready “My Number”.

Foals’ Holy Fire is a surprisingly top notch album, but most of all it’s album that has a little bit of a kick. The sequencing of the album is also done very well, transitioning song to song effortlessly and intuitively. With 25% of the year gone, this is definitely one of early 2013’s best offerings.