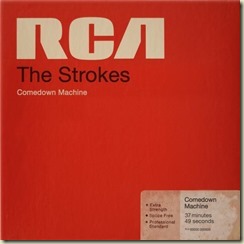 Over time popular opinion seems to mesh together about certain music that we all agree is “a classic”. We immortalize albums in Best of the Decade lists and use them as comparison tools to other albums. The Strokes have been fortunate enough to exist amongst the legends, mostly because they gave the world Is This It, a gritty, cool rock album. Whether you know it or not, you’ve heard “Last Nite” before, and probably “Someday” as well. I wonder if there’s anyone out there right now who hasn’t heard The Strokes since those days. I’m sure there’s plenty of people, actually. It’d be interesting to watch their face as they listen to the two most recent Strokes albums.

I was not just a defender of their last album Angles, I was a promoter. It didn’t get panned necessarily (MetaCritic score of 71, compared to 91 for Is This It), but it mostly lacked a lot of attention and fanfare. This was undeserved, and I still stand by calling it the best Strokes album of them all (and “Machu Picchu” the best song). And now we have Comedown Machine, another album is a similar mold and style, though perhaps a little more eclectic even. It also happens to be very good.

The two most apparently good tracks to me are very different. “One Way Trigger”, which features a catchy synth and even a gentle piano at one point, is simultaneously ridiculously great and preposterously different from anything in the old Strokes catalog. “Chances”, my personal favorite, is not just slow, but positively melodic. A great soft guitar line, reverby verses, and the most pleasant chorus they’ve ever constructed form the backbone of “Chances”. Other highlights include the frontload of the more rock-driven “Tap Out” and “All the Time”, “Happy Ending”, “Welcome to Japan”, and the more classic sounding “50/50”.

Many bands change their style over time. The Strokes are just one of many. But very few have ever transitioned so well. I don’t feel The Strokes have lost their identity. It’s still somewhere in there and the early style shines through at times. This album may not be as good as Angles, but it’s still very good, and rivals Is This It for second best.