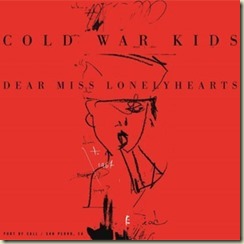 I think I’ve already written twice about how I feel about the new Cold War Kids track “Miracle Mile” and how it relates what their misstep of a third album. To recap, in brief: Cold War Kids’ first two albums are two of the best I own, and they hold a special place in my heart. I believe Cold War Kids, along with Spoon and Mutemath, to be one of the most underappreciated bands making music today. Their third album, whether it meant to or not, reeked of a band desperately clawing for a crossover hit, but in a way that felt compromising to their identity. I love it when my bands get popular. I want my bands to get popular. But that band barely sounded like the Cold War Kids. I wanted the band that once fit “I give a check to tax deductible charity organizations” over barroom piano romp and made it sound great.

“Miracle Mile”, which happens to actually to be the second best track on the album, signals a return for the band when right out of the chute they sing “I was supposed to do great things!” over that familiar old piano. I’m probably reading more into it than it deserves, but the line is all too appropriate in describing an attempt to find greatness, only to return to where they belong. On their 4th album, Cold War Kids get back to where they belong.

Cold War Kids have always sung with earnest and heart, and by the time the second track, “Lost that Easy” is over, I’m already declaring them “back”. Elsewhere, “Bottled Affection”, builds over handclaps to form a powerful chorus and “Tuxedo” features some of the more bluesy elements familiar to fans.

The best track of the bunch, and one that is getting a ton of play by me right now, is “Water & Power”. Soft reverbed vocals emerge over a much softer piano than usual. “Are you willing? Are you brave?”, they ask as the song grows in a way that adds power without compromising the song’s more delicate message. Here is a song that features a different side of Cold War Kids without feeling inauthentic.