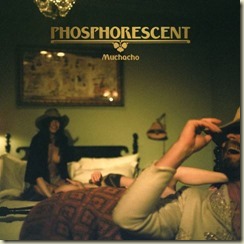 This is an album review for the album “Muchacho”, but it’s just as well a review for “Song for Zula”, the album’s first proper song and the album’s centerpiece. The more sonically focused lead track is, by it’s very name (“Sun Arise! An Invocation, An Introduction), just a lead in for “Song for Zula”, which fades in on the back of sad strings and synths and a Johnny Cash-borrowed opening line. What follows is that perfect kind of song: lyrically captivating, beautiful, heart-wrenching, and heartfelt. Picking out a favorite line is possible, but almost seems wrong, so I’ll copy out the whole first verse:

Some say love is a burning thing
That it makes a fiery ring
Oh but I know love as a fading thing
Just as fickle as a feather in a stream
See, honey, I saw love. You see, it came to me
It put its face up to my face so I could see
Yeah then I saw love disfigure me
Into something I am not recognizing

It’s when Matthew Houck drops his voice and says, with his voice weary, “yeah then I saw love disfigure me, into something I am not recognizing”. His voice trails off and the strings swell in again, and the heartbreak has settled in.

“Song for Zula” is the highlight of this album, but it is hardly the end. “Terror in the Canyons (The Wounded Master)”, with its steel guitar, piano, and slight building tendency, is a star on its own. “Muchacho’s Tune”, which utilizes soft horns and piano and barely more, leads into “A New Anhedonia” another beautiful crossover between country, folk, and indie. The changeup happens on seven-minute-plus “The Quotidian Beast”, probably the second best track on the album, which turns into quite the romp of guitar and piano by the end.

I love albums like this being added to my collection, because this is one I didn’t see coming. This was a throw-in purchase between The Strokes and Cold War Kids. And it’s probably the best of the three. Reminds me of when I bought The National as a throw-in with Minus the Bear and The Hold Steady in 2010, and found one of my favorite all-time albums. “Muchacho” will certainly be on mine and many others’ year end lists, and if I’m right “Song for Zula” will be at the top of quite a few as well.