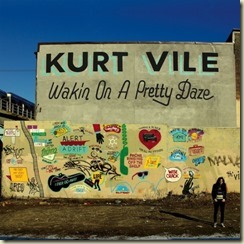 Perhaps in a different time or a different mental state I would find a lot to like about Kurt Vile’s latest album, Wakin on a Pretty Daze. Fact is, there is little negative to say about the album as a whole. Vile executes a very pleasant sounding collection that sounds great as a whole, but falls short when trying to identifying the high points of the album or single tracks worth saving. I suppose that’s both a compliment or a criticism depending on who you are and what you want. Could I sound a little more non-committal or indecisive?

Kurt Vile once again crafts his great blend of indie-meets-folk, with a dash of psychedelica. His vocals are soft and even lazy, and one can easily picture him singing the whole album with his eyes closed or possibly high. Maybe because the only drug I’m on is the Starbucks mocha I’m currently sipping I don’t find it as completely appealing as someone possibly could. But the fact is that Waking on a Pretty Daze would be a lot better served being played in its entirety in a Starbucks than it would soundtracking anything short of your latest essay. Part of this is because of how protracted the songs are. “Goldtone” is over 10 minutes long, and there are three songs longer than 7:42. Add in two more songs at six minutes or more. Indeed there are many moments where you say “that was good, but once is enough”, because the length rarely leads to anything much different than you heard at the beginning. As a non-stoner, I suppose I judge these as stoner jams.

That being said, the psychedelic guitar that runs behind the title track is an awesome piece of music. “Was All Talk” manages to build a little upon itself, electronically evoking something closer to The Antlers, which is high praise. The two best tracks are stacked in the middle starting with “Pure Pain”, which introduces something different sounding in an album that tends to blend together, suddenly shifting gears to something beautiful around the minute mark. “Too Hard”, the album’s top track, is dreamy and wondrous, combining the best of Kurt Vile with the same sort of alt-country touches that made the War on Drugs album so good. The lyrics when sung with Vile’s pensive vocals over some simply fantastic guitar work make for a great song on a thoughtful night. “There comes a time in every man’s life when he’s gotta take hold of the hand that ain’t his, but it is”, he sings. If Vile’s best trait is his vulnerability and deep thought, “Too Hard” displays it in full.