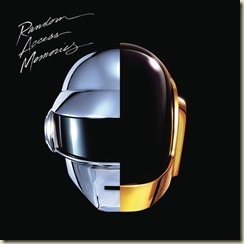 I admit I feel unqualified to review Daft Punk, seeing that I never owned any previous albums, and mostly knew of them because I loved LCD Soundsystem’s “Daft Punk is Playing at My House”, and sure, of course I own “One More Time”. They are held as legends in their field, and their name carries overzealous passions and criticisms. Just look at the range and ferocity of their Amazon ratings. So take this review for what it is: it’s the opinion of an alt rock and indie music fan, whose tastes are well-documented. If you trust me and my tastes, and also don’t know much about Daft Punk, this is probably for you.

I never intended to buy this album, but I’m glad I did. I have been under the impression that Daft Punk make dance music, and debut single “Get Lucky”, infectious as it is, gave me the same impression. It’s funk groove was amazing. It’s impossible not to dance to. But it’s also not really my thing. Fun to own as a single, fun to play at the right moment, but did I want the whole album? Surely not.

Why did I change my mind? My wife played “Doin’ It Right”, a track that features Derek-approved Panda Bear, aka the part of Animal Collective that I like. The track starts with computerized voices prominently found in Daft Punk, building over a beat track. About a minute in, Panda Bear kicks in, channeling vocals reminiscent of great Beach Boys tracks. Noah Lennox, the name behind Panda Bear, has always channeled that uncanny Brian Wilson-vibe, but put over top of Daft Punk musical styling, you have one of the year’s best track.

Despite the variety in styles here, there’s some clear emotion at place, and tracks like “Within” easily get under your skin. Accompanied by some perfect classical piano and keyboard, a sad, robotic voice admits “there are so many things that I don’t understand…”. “Touch” is even more symphonic, stirring to great heights at the end of it’s 8 minute strings-meet-space age journey. Another top track—unsurprisingly to me—features Julian Casablancas of The Strokes fame. It’s the alt rock-iest number.

There are plenty of musical and dance tracks as well, too. I’m sure that there are segments of fans that will find plenty to love about “Give Life Back to Music”, “Contact”, and “Motherboard”. There’s also something distinctly alluring about “Giorgio by Moroder”, a track that essentially doubles as a riveting story of Italian record producer Giorgio Moroder’s development as a musician.

Daft Punk has another fan. I’ll probably never be as passionate a fan as some, but I definitely think the album deserves much of the esteem it’s getting. I can already tell it will be #1 on many year-end lists around the internet. I’m not ready to proclaim it #1 yet, but it will slip into my best of the year list where it belongs.