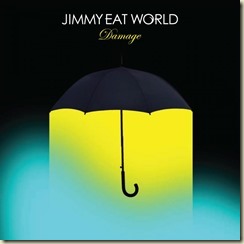 Jimmy Eat World has been a band for nearly 20 years now. For over 13 years, dating back to when the public at large came to know of Jimmy Eat World when “The Middle” inexplicably took over the radio, the band has been churning out great albums with incredible consistency. Unfortunately, these albums have been mostly overlooked, and I venture to guess many readers think Jimmy Eat World disappeared quietly into the void, content to live off of nostalgia for 2001. It’s a shame if this is you, because that means you missed 2004’s Futures and 2007’s Chase This Light, two of the best modern rock records there are.

Their newest effort, Damages, largely follows in a similar vein as 2010’s Invented, showcasing a rock band content with their formula, happy to be the masters of alternative-rock-meets-power-pop, and peppering an album full of emotion-driven songs with apparent ease. Jimmy Eat World, capable of crafting some of music’s greatest anthems—namely “Dizzy” and “23”—give plenty to love once again, although admittedly the album lacks a song quite near the level of the greats. (Side note: when I say “music’s greatest”, I mean that in a non-hyperbolic way. That’s right. I truly mean these are two of the best songs I’ve ever heard. Thought I should clarify!)

One of the album’s strongest songs, “I Will Steal You Back”, powers along at a toe-tapping, hand-hitting-the-steering wheel pace, soaring like the best Jimmy Eat World songs do. Another of the top track, “No, Never”, uses a stunning bit of synth in the mid-section, breaking from from the mostly guitar-driven mold to provide the album’s highest high. Album opener “Appreciation” is a classic throwback, something that could have easily made it’s way onto the eponymous 2001 album that made them stars for a moment. “Damage” is possibly the most accessible song on the album, a track that strikes an emotional chord, carrying along on the back of a great chorus. Always a good live band, Jimmy Eat World gives the fans another great sing-along moment when they slow down and declare “I’ll say when I’m ready/You’ll know when I’m ready”.

The only negative here is a lack of overwhelming positives. The tracks mostly present themselves in a predictably solid manner, and there are no moments short of perhaps “You Were Good” that are subpar. There are also not a lot of transcendent moments. There is no “Sweetness”, no “23”, no “Dizzy”, or even “Littlething”. Until this album, there’s been at least one song that would make me turn the volume in my car past where it should be and strain my vocal chords. “How You’d Have Me” makes for a great loud song, but it’s no “Dizzy”.

I don’t mean that last bit as a criticism, really. Since 2001, Jimmy Eat World have never made anything resembling a bad album, and they twice made truly great albums. This is a good album. Any Jimmy World fan, myself included, should be thrilled to add to a collection from a band that is very much still alive and kicking.