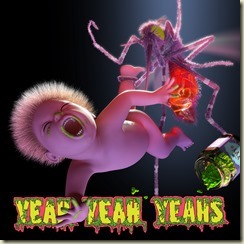 Sorry about the album artwork. That was their choice, not mine…But anyhow, there was a time when I’d have said that Karen O and her band the Yeah Yeah Yeahs were one of the most dependable rock bands playing at a festival near you, and I’ve been a big fan ever since I was fortunate enough to see them live at the 2009 Sasquatch Festival. The Yeah Yeah Yeahs are energetic, entertaining, talented musicians, and have a knack for showmanship. What’s disappointing is that their newest album, Mosquito, marks a dramatic step backwards as it traverses an awkward 47 minutes. This is surprising given not only their track record, but also the stellar opening track, “Sacrilege”. No doubt, taken individually, this is a highlight of the year. It’s a trademark Yeah Yeah Yeahs: forward moving, slightly over the top, and featuring a heck of a synth line trailing through the background, not to mention the gospel choir. Unfortunately, the album peaks here at track one.

There is more to like, but it’s not plentiful. “Subway”, a dreamier number, ambles around and can strike you well if the mood is right. “Mosquito” has some of that Yeah Yeah Yeah's bite, with Karen O screaming “we will suck your blood!”. “These Paths”, a synthy, reverb-tinged number is one of the more interesting songs on the album as well.

The back half of the album is where things really fall apart, starting with the bizarre and unpleasant “Area 52”, which is barely anything more than amateur noise rock. “Buried Alive” attempts to bring back 90’s era rapcore with Dr. Octagon, awkwardly bringing back something reminiscent of Faith No More’s “Epic”, only without the nostalgia. Other tracks like “Despair” and “Wedding Song” mill about directionless, offering little worth remembering in albeit pleasant sounding songs.

Truth is, there are things to like here, but not the album as a whole. “Sacrilege” is certainly worth owning, that’s for sure. But this is certainly a lesser offering a band that has blessed the world with the likes of “Zero”, “Maps”, “Gold Lion”, and “Heads Will Roll”.