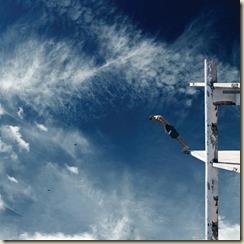 I admit to feeling a little shame that I didn’t really know anything about The Boxer Rebellion until this year. I believe I’ve vaguely heard of them, but I owned no tracks, despite them being a British alt rock band with three full albums already under their belts. So if you’re like me, join me and discover them now, because there’s a lot to love. Let’s start with the reason that I bought this album in the first place, lead track “Diamonds”, a yearning and atmospheric track chalk full of sincere vocals and great synth and guitar work. “Are you angry at me now? Are you angry cause I’m to blame?”, sings Nathan Nicholson thoughtfully. The track is so good I bought the whole album on faith, which is a dangerous thing to do and has cost me lots of money over the years. I broke my own rule, which is never trust an album where the lead single is the lead track, because very often garbage is to follow. Thankfully, there are exceptions to this rule.

Second track “Fragile” has the distinction of being just as good as “Diamonds”, and only my mood determines which is better. I can assure you “Fragile” is better to run to, though, and I’ve already done it more than once. Songs like “Fragile” showcase the bands musical chops, combining a crescendo of guitars and keyboards and vocals into a swelling thing of magnificence. I so want to see it live. It would be a great concert closer.

It’s no knock on this album that the best two songs are the first two songs. Yes, the album peaks early, but there is plenty more. “Take Me Back” is as forward-moving as “Fragile”, showcasing once again the prominently good guitar work on the album. Nicholson voice hits a falsetto that soars over guitars and oh-ooohs. “Low” will strike a chord with Coldplay fans, pumping encouraging messages over piano and an up-tempo second half. “Keep Moving”, in the same vein as “Take Me Back”, propels itself along very well as well. The album’s two closers are excellent as well, concluding on the back’s of orchestral “Dreams” and soaring “Promises”.

This is an album for fans of Foals and Muse and the like. What The Boxer Rebellion lack in distinguishing characteristics, they make up for with superb execution, both musically and vocally. This is a nicely produced album from a group of professionals in a way that is a compliment. “Diamonds” and “Fragile” are certainly worth $2, but if you like them the rest of the album has many more treats.