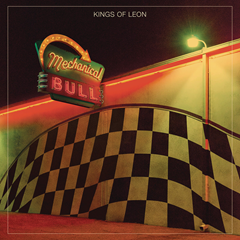 The journey of Kings of Leon has been a strange and opinionated one. Nearly everyone who is into alternative rock or the festival circuit has an opinion on the Tennessee rockers. Such is life for a band that committed the two cardinal sins of indie music: 1) changing their sound, and 2) getting huge. I discussed their transformation back in 2010 when Come Around Sundown was released and showed a band that wasn’t completely sure whether they wanted to be gritty southern rock or new school arena rock. The result was a bit of a mixed bag, and now we sit three years and one drug and liquor-fueled hiatus later. Because of the range of opinions surrounding KoL, allow me full disclosure regarding mine. Did they change their sound? Absolutely, indisputably yes.

Just listen to the difference and understand what people mean when they criticize. If you were in love with their early albums and don’t like what they’ve become, I don’t blame you one bit. I don’t necessarily fit into that group though. I believe Kings of Leon are at their best when they combine their southern rock soul and gritty vocals with just a touch of polish. That being said, this is where I think they peaked:

Although I’m an “old school” fan, I believe their best work was not 2003’s Youth & Young Manhood or 2004’s Aha Shake Heartbreak, but actually was 2007’s Because of the Times with 2008’s Only By the Night a close second. 2010’s Come Around Sundown was too much of a compromise, juggling between the old and the new, and ending up tepid and mediocre.

So now, three years later, we get 2013’s Mechanical Bull, with some early promises of returning to the early roots teasing fans ears. In reality this is only true to some extent, but it’s a definite improvement over their 2010 effort, and thus their best effort in half a decade. The album starts with a rush, and it’s hard not to get a little excited. Lead single “Supersoaker” is the kind of gritty-meet-a-touch-of-polish track that I love, and would be a top track on nearly all of their albums. “Rock City” is the kind of fun track we haven’t seen in a while, with Caleb Followill declaring he can “shake it like a woman”. “Rock City” and grinder “Don’t Matter” pull out of the arena rock phase that KoL entered, existing in a more pure rock ‘n roll sense. There’s even some more produced-sounding tracks that succeed in the vein of Only By the Night. “Tonight” survives and thrives on the back of a soaring riff, built for the big stage. Even when he soars on “Tonight”, Followill’s voice doesn’t have the same echo chamber reverb that is used on Come Around Sundown, and it’s a noticeable improvement for a vocalist who gets miles out of his throaty growl. “Comeback Story” is autobiographical (“Picking up the pieces in the world I know/With one in the fire and one in the snow/
It's a comeback story of a lifetime), and will likely please fans of the more charming side of KoL. What really hits you on the song, though, isn’t just the lyrics but the way Followill sings them with such sincerity. Followill’s lyrics can be cocky and brash, but here he sounds legitimately wounded.

Lest I heap too much praise on the album, there’s also plenty of unexciting tracks here too. “Beautiful War” is a little too clean and brooding, and “Temple” goes nowhere. “Coming Back Again” and “Family Tree” are forgettable. Overall though, the album is a solid return to goodness, especially on the strength of a strong opening, and a smattering of winners like “Tonight”, “Comeback Story”, and “On the Chin”. For a band that I wasn’t sure would keep making music, I’m pleased. I’ll probably always listen to Because of the Times to get my Kings of Leon fix, but Mechanical Bull is a much more solid effort than Come Around Sundown, balancing their gritty charm with their expansive new sound without feeling like a compromise, and this album may foreshadow a good post-superfame musical life for one of the best mainstream acts in music.