Discovering the Lesser Known Side of The Beach Boys 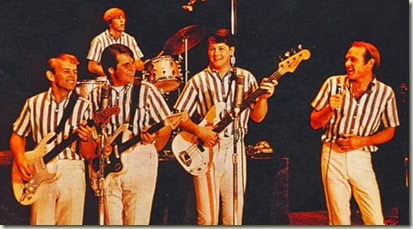 “When you listen to Pet Sounds, you use earphones, in the dark.” –Brian Wilson

As you start reading this post, I’d like you to click play on this track as you read my intro. The song is “Feel Flows” and the band is The Beach Boys. The same Beach Boys who you probably know for all the typical things: surfing, sun, girls, and California.

When Pandora first came around we were first introduced to the Music Genome Project, and if you are a Pandora user you may have been taught a little bit about your own music tastes. Maybe you learned a little about why you like what you like and learned some new terms. Music taste is such a subjective thing. I can try to explain it you why I like one sound more than another in paragraph form, but Pandora took that same information and tried to feed you bands and songs that were similar.

As I got more and more into music, one constant underlying comparison that kept coming up in bands I liked was Brian Wilson and The Beach Boys. The Shins, for example, often elicit Beach Boys comparisons, albeit subtly. For Local Natives, another favorite, it’s more obvious. I’ve seen comparisons made between the Beach Boys and Panda Bear/Noah Lennox/Animal Collective. Recently, while reading a little bit about Caveman, a smaller band I recently got into, The Beach Boys came up again. Here’s an example, side by side. Check out the isolated vocal track of “God Only Knows” next to a more modern track from Panda Bear and tell me you don’t hear the influence.

Here’s a band that, in 2013, is still being used to explain a certain identifiable sound over and over and over again. How prevalent is that? How many bands did something so distinct that their very sound can be described as Beach Boys-ish? What the Beach Boys did—essentially take barbershop quarter harmonies, intermingle them with pop music and experimentalism, and create a sound that helps to define the entirety of Southern California—is legendary if you think about it, but generally unappreciated. We revere The Beatles, Elvis, and Michael Jackson, but there’s a forgotten history amongst my generation surrounding the Beach Boys, a history that’s been whittled down to their sunny early hits like “California Girls”. But the Beach Boys are a complicated lot, as haunted and divided by their own stereotypes as anyone. The constant divide between Brian Wilson’s desire to be a forerunner in experimental music and Mike Love’s desire to be the cars-and-beaches-and-girls band that originally hit it big dragged the band apart for decades. I look forward to watching Paul Dano star as Brian Wilson in a legitimate biopic next year. Expect me to be there on opening day.

There are too many great pieces of writing out there that document the entire Beach Boys history, so I’ll save the internet from having another. But recently I became obsessed with listening to their entire collection front to back and understanding their development. Here’s a nugget of fun for you involving two well know Beach Boys hits, “Surfin’ Safari” and “Kokomo”: they were released 26 years apart. When I found that out, I had to hear everything in between.

To keep this manifesto reasonably short, my goal here is just to share with you some tracks that show their progress and development so that maybe you can begin to appreciate the Beach Boys as groundbreaking legends and not just surfer singers from the 60’s.

Early on it really was cars and surfing and girls. And root beer stands. The Beach Boys were clean and mom and dad approved.

The Beach Boys started to bare a more thoughtful and sensitive side in the next couple albums. Pensive “In My Room”, a song literally about hiding from the world in your room, is Brian Wilson early preview of some social issues that would plague him later. In 1964 they released one their best tracks ever, the comforting “Don’t Worry Baby”.

An awesome look into the studio during the “Help Me Rhonda” recording session, from the same album that featured “California Girls”.

Retrospectively, the band peaked in 1966 with the release of Pet Sounds, which many consider to be one of the greatest single album in the history of music. Rolling Stone has it at #2 on their Top 500 of All Time, NME has it #1.The album is indeed a masterpiece in many ways, combining a deft understanding of pop music with a desire to push and experiment. Straight from Wikipedia, an idea of instrument used on this album includes: “bicycle bells, buzzing organs, harpsichords, flutes, electro-thermin, dog whistles, trains, Hawaiian-sounding string instruments, Coca-Cola cans, and barking dogs”. Any fan of indie music today will recognize that level of experimentation. The Arcade Fire, Sufjan Stevens, and other experimentalists employ similar concepts today to critical acclaim, but did you know the Beach Boys were doing it in 1966? If you want to nerd it up, give this a read: http://en.wikipedia.org/wiki/Pet_Sounds#Recording_process. This album includes my favorite Beach Boys track:

I love Smiley Smile. I love that it confused the crap out of people at the time. I love that it’s half drug-addled, and half brilliant. I love that over time it’s become a cult classic, one of those albums that viewed through a different lense as the years passed by. It includes perhaps the most complicated track they’ve ever written (“Good Vibrations”), the most drugged up hilarious atrocity they ever wrote (“She’s Going Bald”), and mix of stellar tracks and comical duds.

Things weren’t as sweet from this point on, but there are some very underrated and unknown tracks that emerged in the next decade.

Kokomo’s success, in retrospect, is shocking. The Beach Boys, overcome by internal strife and years of only tepid popularity, suddenly scored a #1 hit in 1988, their first since 1966. 22 years!

To things to note during this time period. First, is the debacle that was 1992’s Summer in Paradise, a comic disaster of an album for many reasons. It has a song that features John Stamos! This is wonderful in so many terrible ways:

Their 1992 material was their last originals for 20 years until 2012, when they released an album as a bunch of old guys that was, well, actually pretty dang good.

Everything I love about the Beach Boys you can find by listening to Pet Sounds, catching the isolated vocals tracks, reading about Brian Wilson’s dedication to experimentation, and thinking about their lasting legacy. There has only ever been one band to ever sound like them. An entire sunny, surfing culture and feeling is elicited from just listening to “Surfin’ USA”, a whole avant garde/baroque pop generation emerged from sessions like those that created “Good Vibrations”, and these two songs were created by the same band. And if you think I’m overstating their experimentation, look up the terms and you’ll find Beach Boys references all over the place. If you’re interested in learning more, enjoy the following documentary. Hope you learned something!