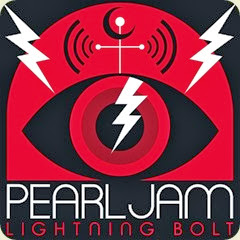 Somewhere in my closet back in Arizona sits a relic of days past. My giant black book CD collection housing every band from A to L, Arcade Fire to LCD Soundsystem. Missing is a matching black book housing the remaining letters. It was stolen out of my car in Boise back in 2009, a heartbreaking incident for a “collector”. Part of the pain of that loss came in the form of losing entire discographies. During a brief period of obsession I had purchased every Pearl Jam album, liner notes and all, and poured through the music like every decent Seattle music blogger should, I suppose. From the revered classics like Ten to personal favorites like Vs to albums that rarely get air time like Riot Act, I became a Pearl Jam fan.

Perhaps there were hints of what “Lightning Bolt” would be, but I didn’t really see it coming. Vedder has never completely shied away from the softer side or strings (see “Man of the Hour”, a favorite, and the string-laden cover “Love Reign O’ve Me” as examples), but ultimately Pearl Jam have existed as a ROCK band. Independently, Eddie Vedder fronted the emotional soundtrack to the film Into the Wild and even released an album called Ukulele Songs of all things. So maybe there was a hint at maturity, but those themes hadn’t necessarily leaked onto an actual Pearl Jam album yet.

“Getaway”, the outstanding opening song on new album Lightning Bolt, is classic Pearl Jam. “Mind Your Manners” is in the same vein, albeit not nearly as well done as “Getaway”. “My Father’s Son” is probably the album’s weakest track. Something happens after this though, and it’s hard for me not to view it as a second album starting on track four, the vulnerable sounding “Sirens” where Vedder reaches a near-falsetto as he sings “all things change, let this remain” before distant guitar echoes in the background. Words used in the song? How about “fragile”, “grace”, “love”, “safe”, “grateful man”, and “distant laughter”. It’s a staggering turn of events that in the 90’s may have been panned. But here’s the thing: Eddie Vedder turns 50 years old next year.

That’s not to say he goes full on wimpy (“Lightning Bolt” shifts the mood a bit as a driving rock song), but there’s definitely some elements of maturity and aging present. “Swallowed Whole” has a distinct Pearl Jam feel, but the lyrics includes thoughts on “what lies beyond the grave” and declarations like “I can start the healing now”. The final three tracks are all softer. “Sleeping By Myself” is a rework of a track from the Ukulele Songs with full band elevating it a little bit. “Yellow Moon” is a stirring track, building and building into something special. And “Future Days”, the final track, is nothing short of special. Ending on a softer note is definitely part of the pattern for many Pearl Jam records, but it’s certainly unlike anything they’ve ever written, as given away right away by the soft piano intro. It finds Vedder pining “All the demons used to come around, I'm grateful now they've left” in perhaps the most telling lyrics of the whole album. Pearl Jam references pain and angst as if it’s past tense (“Back when I was feeling broken”), and focuses on the positivity in the future. The song has piano, it has strings, and while it may sound decidedly “un-Pearl Jam”, there’s just something perfectly great about that. With Pearl Jam’s career spanning over 20 years, they sound fully grown, confident, and comfortable. And to my ears, they haven’t sounded this good in many years.