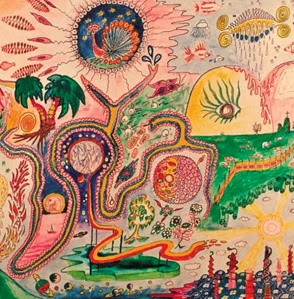 Prolific indie vets Portugal. The Man may have never hit it big, but they have the chops to. Songs like “Atomic Man” pack the rock groove of The Black Keys with the vocals of a pepped up festival sing-along.

I unleashed my ire about the MGMT album and their career trajectory in my mini-review, but the disappointing nature of the album has nothing to do with the hazy and wonderful “A Good Sadness”, which grows out of fuzz and smoke to become a reminder of MGMT’s squandered talent.

Way back in 2008, the song “Lake Michigan” made the cut at a way-too-low #20. Five years later, and after a string of album’s that didn’t grab my attention, they hit back with “College”, a forward moving song with Rogue Wave’s delivering both a hook and vocals that speak with wisdom and experience.

Lying somewhere between Sufjan Stevens and Devendra Barnhart, “Advanced Falconry” is soaked in strings and is an unabashed love song, drenched in positivity. “Oh to stare into the void, and see a friendly face”.

Enjoy them as Cub Scouts now, because the internet tells me they have had to change their name, which I guess means they got big enough for people to care. “Told You So” is a synth pop jam with a great, hooky chorus that will get lodged in your head. It may be winter now, but this is a great summertime song.

Grizzly Bear are elite indie rockers, capable of pushing out b-sides that compete with the best. “Will Calls” is the top track on a stellar b-sides EP, growing from a haunting soft synth and bursting free into an energetic chorus.

I’ve separately showcased Sia and The Weeknd before, but even I’m surprised at how much I let this pop doozy get to me. Sia lends her pipes to a catchy chorus, and The Weeknd’s always impressive pipes play well. Sia, who once before got props from me for her work on the Twilight soundtrack, is making quite a name for herself in blockbuster soundtracks.

Jimmy Eat World is still kicking, and my shameless fanboy-ness still remains. So here I am, once again, using my position as Author of the Blog to remind you that they remain awesome, making pensive alt rock jams better than anyone.

Husband/wife duo Amarante have a deft handle on the nighttime mood, filling dark spaces with their brand of indie folk. “The Despondent One” moves along on the back of a trickling piano and insistent percussion.

“Mute” is a cacophony of sounds at times, mashing a barrage of noise over Trevor Powers’ timid vocals, nearly drowning it out. When the song hits its crescendo though, Powers’ vocals suddenly sail out, creating one of the best moments in music this year.