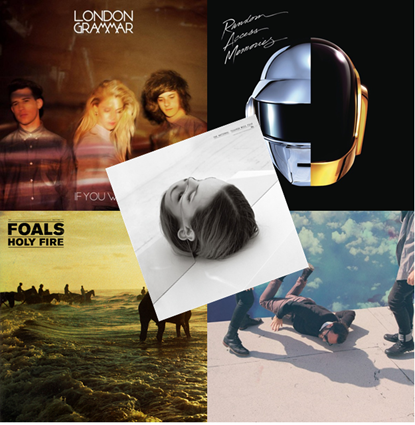 I remember last year really struggling on the albums section, with barely enough to fill my standard top 15. That happens sometimes. It’s what is obviously a good problem to have, unless you’re trying to write a very specific “Top 15 Albums of the Year” column. But that’s okay, it just means 2013 was a good year. It wasn’t 2007 strong, nor 2010 strong, but it’s a step up from last year, that’s for sure. Please enjoy my top selections from a strong year:

Soft Will is an album that I’ve owned since July but barely gave the time of day. I never even reviewed it. But then suddenly in November I started giving it a fair shake and it really grew on me. Led by stellar “Varsity”, the album is full of little gems, like the guitar running through “Best Friend”, the dreaminess of “Glossed”, and the lyrical delivery on “Idol”.

This is the second album in a row where the overall strength of the album doesn’t show in how I feel about every individual track. Blake excels at creating a mood of darkness, and his albums are sparse and haunted. When he abandons the minimalism for fleeting moments like on “Retrograde”, he absolutely soars. Overgrown is not an album to casually pop on; it’s an album meant for the exact right moment, when songs like “Life Round Here”, “Dim”, and “Overgrown” can get under your skin, while “Retrograde” can blow you away.

Even with how much I loved the Arctic Monkeys’ debut album back in 2006, tracks like “Mardy Bum” and “When the Sun Goes Down” didn’t exactly scream that this was a band with staying power, especially as the cheeky Brits faced the inevitability of growing older. Color me wrong, because AM is fantastic and their best effort since their buzzworthy debut seven years ago. And although “consistency” is not exactly the primo word to throw at an album, it’s striking how consistent this album is: front to back, there’s nary a bad track on the whole thing. “Do I Wanna Know?” kicks it off just right and it carries right on through slow-jammer “I Wanna Be Yours” without barely skipping a beat.

Promises starts about as strong as it gets, bolting out of the gate with two year-end-list-worthy four star tracks. And the songs couldn’t be more different. “Diamonds” is the mid-tempo thinkpiece that ponders along in wonderment, while “Fragile” builds and builds into a rock masterpiece (and the running track of the year…trust me, try it on a run). What follows doesn’t live up the beginning, but it doesn’t have to. “Take Me Back” rolls along with forward motion, while “Dream” and “You Belong to Me” have a U2 vibe.

It’s my pleasure to welcome one of my favorite bands back into the fold. After two downright brilliant albums and one disappointing dud in which they attempted to mold their sound into something very un-Cold War Kids-y, the band came back with Dear Miss Lonelyhearts, an album that introduces itself with the romp “Miracle Mile”, an immediate declaration that the band was back to good. It didn’t stop there, with the moving “Water & Power” proving to be one of the most impactful tracks of the year, and songs like “Tuxedos”, “Bottled Affection”, and “Jailbirds” holding down a strong middle pack of tracks on a very strong album. If anything, this album established that their previous effort was just a blip of a misstep, rather than the beginning of the end, and this makes me very happy.

No doubt destined to be #1 on many blogs, Reflektor may very well end up earning the curse of the hyped: simultaneously excellent and overrated. It sure doesn’t skimp on ambition, and for that I applaud it. But although my praise may sound faint, it’s in my list for a reason. The title track, “Reflektor”, is a seven and a half minute masterpiece that will go down as one of their all-time great tracks, high praise for a band with such a strong discography. “Flashbulb Eyes” is a sonic treat, Win Butler’s breathy delivery on “Normal Person” is delightful, and “Awful Sound (Oh Eurydice) is classic Arcade Fire, and the dark “Porno” rivals “Reflektor” as the album’s best.

I’ve always been a Pearl Jam fan, but I was a little caught off guard by how much I enjoyed Lightning Bolt, and album that to me represented growth and maturity from Eddie Vedder’s aging outfit. Some bands struggle with development as they cope with turning from angry 20 year olds to angry 40 year olds. On Lightning Bolt, Pearl Jam copes by easing up a little bit, most prominently displayed on “Future Days”, where Vedder sings about the demons that used to chase him, past tense. There may have been a time when Vedder would have may have resisted the notion of sounding more like a grown man than an angry youth, but at Pearl Jam’s age the mood fits like a glove, and the execution is exceptional.

Say what you will about The Strokes’ career path, but I for one am a big fan of what they’ve transformed into. Comedown Machine is now the second straight Strokes album to make my year end list, and once against it’s a deft blend of rock, electro, and Julian Casablancas’ unique vocals. The stars are the upbeat “One Way Trigger” and “All the Time” combined with the heartfelt “Chances”. The Strokes illustrate the key to growth and molding a band’s sound over the years: if you’re going to morph you must execute well. The Strokes in 2013 sound very little like The Strokes of Is This It, but they still sound excellent.

I was very aware of Phosphorescent before the year started, but I sure didn’t see THIS coming. Matthew Houck had crafted an okay previous album with one real good song, but then in 2013 he drops a stellar album and one of the best songs I’ve ever heard. It all starts with “Song for Zula”, one of three five star songs discovered in 2013, and a song so good it’s worth the album price alone. Houck’s wounded vocals are the key through this alt-country gem, and it carries him through “Terror in the Canyons (The Wounded Master)”, “A New Anhedonia”, and the lengthy and excellent “The Quotodian Beasts”.

To think I almost didn’t buy this album. Random Access Memories was hotly anticipated and came with an abundance of hype matched possibly only by Arcade Fire this year. They rewarded fans—and created some new ones (me)—with a superbly crafted album that plays better as a whole than as individual pieces, the mark of a great album. The album vacillates between pure electronica/dance numbers (like smash hit “Get Lucky”), festival-ready collaborations like “Doin’ It Right” ft. Panda Bear and “Instant Crush” ft. Julian Casablancas of The Strokes, and heart-wrenching tracks like the absolutely haunting piano-based track that is “Within”.

Regular readers will remember some of my laments in 2012 about the preponderance of bedroom electronica sweeping the web, where some indie girl with tattoos and pink hair writes an entire album in her closet on her computer and the web goes nuts over it. Sure, Purity Ring had some great tracks, but I was yearning for something in the alt rock/indie scene that plain rocked. Enter the 8 minutes of bliss that is “Prelude” and “Inhaler” that kicks off the Foals album Holy Fire. It’s a burning, building, coursing introduction to an album that is equal parts energy, Verve-ish psychedelic-influenced rock (“Milk & Black Spiders), and toe-tapping, night-driving wonder (“Late Night”).

Of course I’m not surprised that I love something touched by the prolific Justin Vernon (insert obligatory “Justin Vernon is Bon Iver” reminder), but I’m at least a little surprised that I loved something that came under the Volcano Choir moniker. But instead of using Volcano Choir as his outlet for the bizarre, Vernon here amps up the normalcy with superb results, gifting fans a condensed 8 song LP that’s high on quality and low on fluff. There was no better three song stretch in music this year than the glorious “Comrade”, the soaring “Byegone”, and the gorgeous “Alaskans” sequenced in perfect harmony.

Possibly the best combination of indie rock and instantly likeable melodies are the Local Natives, whose sunny debut album turned heads in 2010. With Hummingbird, the west coasters up the ante, delivering an album still laden with hooks, but with a more serious lyrical quality. It’s a front-to-back wallop led by “Heavy Feet” all the way back to the emotional core of the album, the duo of “Mt Washington” and “Columbia”, which deals with the loss of the lead singer’s mother. There’s not even an average track on this album.

Throughout the year London Grammar let single after single trickle out, and with each release I got more and more excited. The final product did not disappoint, as London Grammar released about as perfect a debut album as a band could ask for. Hannah Reid’s powerful vocals drew apt Florence comparisons, though Reid owns a gentler touch, but it’s the music that carries London Grammar’s into special territory. See the guitar work on “Wasting My Young Years” as a prime example. The band has an absolutely stranglehold on how to create atmosphere and space and combine their music with Reid’s vocals. From the perfect intro in “Hey Now” to the triumvirate of lyrical gem “Wasting My Young Years”, goosebump-inducing “Sights”, and soaring “Strong”, this is one of the more memorable debut albums I’ve had the pleasure of listening to.

1. The National – “Trouble Will Find Me”

With my crush on The National reaching Shins-ish level, it must not be surprising that this album ends up at the top. But expectations can be damning too: perennial favorites Iron & Wine and Jimmy Eat World merit only honorable mentions and Arcade Fire sits at #10. This album though? It’s a powerhouse. Everything I love in music is here. Matt Berninger’s lyrics and delivery are self-conscious and relatable (“when I walk into a room, I do not light it up”). The guitar work is without reproach, and The National always make great use of secondary instruments, like the horns that creep in near the end of “Demons”. There are no bad songs here, and there are many great ones. “I Should Live in Salt”, “Heavenfaced”, and “Demons” are giants amongst other giants. My year-long obsession though, is “Pink Rabbits”, a song that gets under my skin, and a song that shows a rare glimpse of sunshine and hope amongst the gloom.

Honorable Mentions, in no particular order: