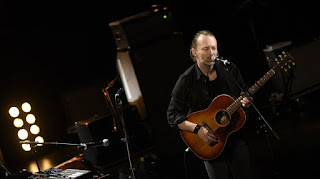 Halfway home in 2016, and it feels like most of the good music lies ahead of us in the form of soon-to-be released albums. But in the last months, with the arrival of the hotly anticipated Radiohead album, 2016 started gaining steam. Here are the songs that I've been streaming heavy this year:

After the massive misstep that was nearly everything on 2012's Centipede Hz, Animal Collective release their best track since they swept the festival circuit in 2009.

Drawing on sounds from the eighties and with some impeccable execution, The 1975 are capable of transcending their sometimes immature lyrics and producing songs as great as this one.

John Paul White and Joy Williams may have born to be a duo as we hear them with The Civil Wars. But with "Simple Song", White gives us by the far the best track one of them has put out since the pair's untimely breakup.

High Highs are high on atmospherics and mood, and on tracks like "Boxing" they show their skill. Fans of bands like Washed Out will really enjoy this.

Sia is possibly best known for "Chandeliers" and the powerful force with which she propels her voice. If you're for more, check out "Broken Glass", which shows no restraint as Sia pushes her voice through the songs key changes.

Color me excited for Young the Giant's album this summer. With "Amerika" and their other single "Something to Believe In", there's a lot of hope that their forthcoming album will be very strong.

Picking the best of Radiohead's new album is tough, but my initial leanings are towards "Identikit" and lead track "Burn the Witch".

James Blake - "Love Me in Whatever Way"

One of the best Blake tracks he's ever written. "This is a lonely off-white room/I keep my gaze on you, while other people move".

I've surprised myself by enjoying the new Lumineers album about as much as any album this year. "Cleopatra" is one of the album's strongest track.

I've always sort of enjoyed Chairlift, but I actually don't think I've enjoyed them more this.

Buried under what might first come off as forgettable mid-tempo Brit Rock is some truly fantastic guitar work that serves as the underpin for most of Boxer Rebellion's great tracks, such as "Big Ideas".

With the exception of the fantastic "Solitude", M83's newest album was way out in left field, sounding nothing like you'd expect (except if you are used to expecting the unexpected from them, of course). One of my favorite tracks is this one.

Band of Horses' new album is a return to form, and the opener announces that very well, with a sprawling 7 minute track that transitions from dreamy, lonely musings to a guitar-driven finale.

Another recent purchase, my first impression is strong and I look forward to hearing the full album.

Rogue Wave always manages a few gems off of every album. The one I like the best right now is "Memento Mori".