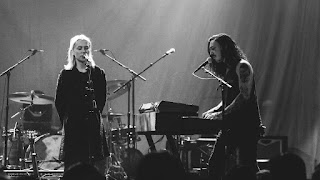 Disclaimer: I am not a professional and while I do hope to hear every song at time of release, there are some 2017 tracks in here as always. This is more like a list of the 50 songs I fell in love with this year. I try not to overdo it with too many songs by the same artists, but everything I loved is in the Spotify playlist regardless of how many times it's the same artist. I hope you enjoy and find something you love.

Some of my more recent discoveries populate the start of my list. Although Great Lake Swimmers find themselves on the list many times, including in the top 5, the others are all singular. Mitski's track is a new find populating a lot of lists this year. Panic! At the Disco made a fun comeback this year, and I've always felt they deserved a little more respect than how they were originally pigeonholed. First Aid Kit and Young the Giant both had lackluster albums, but their top tracks are worth a listen. How to Dress Well has some of my favorite songs of all time (seriously, go listen to "Lost Youth/Lost You"), but they tripled down on the weird on their newest album, and only "Hunger" made my list. Jade Bird is for the fans of poppier numbers, and apparently it hit #1 on the Adult Alternative charts last April. Had no idea. And yes, that's a popular country song with Lee Brice's "Boy". What can I say, I have a 2 year old and I'm a sucker now.

I'm hoping for the return of a proper Grimes album in 2019 as her one single at the end of 2018 is a great tease. Check out the unabashed saxaphone and falsetto on "Wrong Side" and tell me you don't love it. Hozier sure hit it big the last time around so he's no small find, but that voice is still killer. Handsome Ghosts is the kind of song I'd have liked better in high school, but there's still a version of that person in my somewhere. Rayland Baxter deserves more attention, though I'd still recommend one of my favorite songs ever, "Yellow Eyes". Death Cab had a pretty solid album this year, and "Gold Rush" was the best track. Chvrches also had a very good album, and "Graffiti" joins "Get Out" and "Never Say Die" to highlight it. Great Grandpa is a local Seattle band I was lucky enough to see open for Spoon this year.

Call this the sentimentality segment, full of old friends. The new Arctic Monkeys album is a sight to behold, and lyrics like that can only be sung by someone like Alex Turner. MuteMath has had some band changes and may never be the same, but "Sooner or Later" proves they still have great tracks in them. Muse was my favorite band in college circa 2005 and has challenged my fandom over the years, but "Algorithm" is fantastic. I think The 1975 would have been my favorite band in college if they existed back then. Andrew McMahon is my nostalgic hero, so not a surprise I included my favorite track from his newest album. Mat Kearney's song is a guilty pleasure of a track. I prefer the acoustic version, a simple ode to falling in love with someone you grew up with. I met my wife at 14 and she is always making me better. I’ve spent many words in the course of the blog trying to let people know there is more to Snow Patrol than Grey’s Anatomy and “Chasing Cars”. Consider this another reminder. You are welcome.

Lana made us all fall in love on “Video Games” than has since followed a winding career path of Billboard hits and collabs. “Mariners Apartment Complex” is the Lana I dream of in my meaningless hopes. Impossible to nail down, Lana can at moments be among the best there is. "Thank You, New York" is love/hate relationships at its best, except for Chris Thile (of Nickel Creek), his love/hate is more with a city than anything. Thus is born a sarcastic ode to a butt kicking. Lo Moon probably exists with too little of a core audience. After all, what is the market for 7 minute dreamy tracks like this one? Likely not experimental enough for the experimental crowd, but not poppy enough for the pop crowd, it finds a fan in me. I honestly never thought Interpol stopped making good music.

Released on a small EP, “Autumn Town Leaves” is vintage Iron & Wine with Sam Beam continuing his welcome return to niche. Nearly a decade after they soundtracked writing my thesis in 2010, Mimicking Birds have upped the electronic elements a bit, but have started to catch on the festival circuit a little bit. Check out their top track from their new album. There are several stellar tracks on the latest Chvrches album, but “Never Say Die” is the fullest, richest of the songs, with Mayberry’s strong vocals carrying over a swarming rush of electronic rock that bring the final minute of the song to it’s amazing, M83-like conclusion. I have only had "Slow Burn" on my playlists a few weeks, so time will tell, but I cannot turn it off. Great Lake Swimmers' "They Don't Make Them Like That Anymore" is a tough track for me after losing both of my grandparents this year, I admit this track will probably not affect you like me. But when the line “it won’t be the same without you, I know” is paired with talk of Christmases with grandparents, new babies, and the acknowledgement that “while some things are different, some are always the same”, it’s a heartbreaking track I can barely get through. I’ll love you forever Grandma and Papa.

Looking for a new name to watch? Isaac Gracie has an astounding voice and "Terrified" is his best work to date, the highlight track on his debut full-length album.

Someday we'll get a documentary that chronicles MGMT's meteoric rise, accidental fame, and the subsequent anti-hit albums that followed. But if you weren't paying attention you might miss that MGMT released their best, most accessible music since "Time to Pretend" and "Kids" soundtracked just about everyone's 2007 and 2008. The highlight of several outstanding tracks is "Little Dark Age".

Care for some psychedelic-tinged indie folk? Living in an accessible folk/indie niche, the mistake would be to conflate Lord Huron too much with Mumford & Sons or The Lumineers, but Lord Huron exists as the best of them all, and they are getting quite consistent at this point. "Ancient Names (Part I)" is one of the most interesting tracks they've produced to date, their hazy folk propelling quickly over an unforgettable bass line.

I have an affinity for The 1975, a band like few I can ever remember where the phrase “more than meets the eye” applies so aptly. A couple years ago “Somebody Else” was my #1 song, this year “Love It If We Made It” lands in the top ten. I was also excited to see it chosen as Pitchfork’s #1 song of the year, rising above the indie hip hop that crowds their lists these days. Their write-up is superior to mine I am certain, but I’ll briefly share my thoughts: crowded with lyrics of negativity, this is a song that is, in the end, upbeat and hopeful. It is catchy, musically it is interesting, and lyrically is it memorable.

6. Ray LaMontagne - "Such a Simple Thing"

Long one of the more soulful voices in music today, LaMontagne releases perhaps his greatest track with “Such a Simple Thing”. Beautifully simple, it creates a backdrop of acoustic guitar, soft beat, and a slide guitar, with LaMontagne’s bruised vocals carrying the weight. “My heart is like paper, yours is like a flame”.

There’s a 90’s retro feeling to Snail Mail’s sound here, a throwback to the electric guitar, bereft of any electriconica/synth dazzlement popular now. This is a girl and her guitar, and the vocals and the way they attach so viscerally to the lyrics, make the song. There’s honesty, hurt, and even a pragmatic realism to the words here to where it sounds almost matter-of-fact instead of forlorn when she sings “I know myself and I’ll never love anyone else.” I mean, it’s just a fact, right?

Long a favorite band of mine, Great Lake Swimmers have hung in the realm of Iron & Wine and Nickel Creek, but with not nearly the same recognition. Softly sung and introspective, “The Real Work” rolls over piano and the hum of a cello. I’m not sure the exact inspiration behind the song, but it has a way of speaking to me personally, and includes my favorite lyrics of the year: “And the real work is never done, and has no clear beginning, and shows no result, no losing or winner.”

The revelation of Gunderson’s existence this year, and introduction to his genre-bending work, was my top discovery of the year. And with finding my #1 track, I also discovered his self-titled solo work. “HEAVY METALS” is alternative rock at its finest, building and building until breaking free in a rush at the bridge, my favorite singular moment in music I found this year.

2. Manchester Orchestra - "I Know How to Speak"

Released independently of the great album released towards the end of 2017, “I Know How to Speak” showcases a softer, dreamier side of the great storytellers. Layered in guitars, there’s an element here that begs you to close your eyes and get lost.

My song of the year this year is actually two songs, merged into one, both supplanting their works as individual tracks by blending into a heartfelt masterpiece. You do not need to know the original tracks to enjoy “Killer + The Sound” on its own, but listening to them individually will help you appreciate it more. “Killer” is not strikingly different, sung also over piano and blended with male vocals on the chorus on both the original and the new version, but Bridgers taps into a more soulful place when singing with Noah Gundersen. Gundersen is the author of “The Sound”, a top-notch track on its own, but one that is nearly unrecognizable from the new version. “The Sound” is a propulsive alternative rock song, with a driving, soaring chorus. Transformed on “Killer + The Sound”, Gundersen’s track becomes something new and wonderful entirely, and he owes much of this to Bridgers’ bruised vocal over a soft piano. When Gundersen takes over, he takes it up yet another notch. The mashup, or “reimagining” to use a more accurate term, lasts nearly eight minutes, and results in the year’s best track.